A blonde singer is climbing the UK charts, full of character, Kim Wilde. But on closer inspection, she seems aware of it already: inactive Kim was engaged to Simon, years ago, it seems that...

Confess, Debby readers: When you saw the photo of Simon Le Bon with this girl your heart skipped a beat! No, there's nothing to worry about: Simon is still happily married to his Yasmin and continues to travel the world with 'Strange Behaviour' tour with the other two from Duran Duran. It is not, therefore, a new couple in music: pointless to ask the title of the song that Simon did not sing because, for the moment, going to back away from Durans (and thank goodness!). So, how did your Debby to find a photo taken with Simon Le Bon Kim Wilde (and that the girl's name)? Well, maybe some of you, will notice that in this shot Simon looks a bit younger than today: this is in fact a photo of 1982, when Simon was with the British singer Kim Wilde.
But, as is now well known, Simon has always changed a lot of girls before seeing Yasmin Parvaneh and Kim's story is not very hard.
Both were born under the sign of Scorpio. (Kim was born in London on November 18, 1960), were able to agree on will go not long: Kim, however, has never abandoned her musical career and is still in the UK charts with her latest single, 'Another Step 'duet with Junior Giscombe.

Her style? The dance music, which wasn't very popular in England, although only recently returned to Kim Wilde hits the charts.
She needed just a hard impact to be brought back into the Kim's beloved by the British, when, so he chose an old piece of the Supremes, the trio of American women in which militated Diana Ross in the 60's success has come to shine for her. 'You keep me hanging on' and was one of the biggest hit of the clubs last winter, and Kim, now that he has found time lucky, he has no intention to have it escape.
But how did this Kim Wilde, even for a short time, manage to crash the lovely Simon? If any of you have seen, about three years ago, its clip on television in front of you already will have a better description than exhaustive: Kim is a beautiful girl, confident and attractive than ever ready to respond in kind.

And if it was just Simon?

Kim conferms: 'Yes, true - but, in reality, I'm not very good at discussing, with the words to support my arguments. Lately, however, it has much improved: in the past, however, I was often in trouble and so, when I did not know how to respond, I just lashed out. The latest your private that I did something like this has been a long time ago: it was my boyfriend. He was much better than me to convince people with words and there is nothing in the world that irritates me more of a person who is wrong, but he can still win with words, which always manages to have last. For this I gave him a good slap! '

Oh my God, but you will be kinder to Simon Le Bon, do you? Who knows, we will remain forever in this doubt, also because Kim is not the sort of afraid to give someone.

'I think I'm a bit hard sometimes, happens to me, especially when something bad happens to me: if someone says anything bad and I get annoyed. It's not my fault: it's just my character! ' That little chap, this Kim! Alongside Simon would make a truly explosive couple! 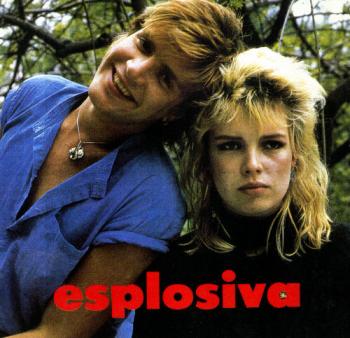