Kim Wilde is the dazzling chart-topper whose sultry blonde looks and shimmering sexuality have proclaimed her the Bardot of pop. Fans see her as the ideal woman, but when she arrives at the fashionable London restaurant, beautiful in black, she pours scorn on comparisons with the French sex symbol.

'Bardot is a natural beauty and I am not', insists the 26-year-old singer, who recently hit no. 2 in the charts with 'You keep me hangin' on'.

'The problem is that I don't have a strong shape to my nose, or to my eyes or lips. I just have a naturally unremarkable face; it's uneventful.'

Which is more than can be said for her career. A few months after leaving college she zoomed to stardom with her first single, 'Kids in America', written by her father, fifties rock idol Marty Wilde, and her brother Rick. Hit followed hit, along with albums like 'Catch as catch can'. She was mobbed and feted. Her concerts were sell-outs. But, just as quickly, it was over and for four years her recording career languished in the doldrums.

Then a sort of miracle happened. Just before Christmas she recorded the Supremes' hit, 'You keep me hangin' on'. An album followed entitled, appropriately, 'Another step'. For the first time, she cowrote most of the tracks and produced the song 'Missing', which features in the film 'Running scared'.

Next month she releases the album's title track as a single. She is sifting through film offers, appearing live at British venues like the Wembley Arena, and this year touring Europe, Japan, Australia and the U.S. Kim is right back on top again. 'Something very positive came out of the dip in my fortunes', she claims. 'I've stopped taking myself so seriously. When my records stopped selling here I became involved with EST (Ernhard Seminars Training, the mind-bending cult which uses brainwashing techniques).

'I knew the whole thing was going to be scary, but I came out of it a much stronger person. I used to be sensitive about a lot of things. Now I don't realy care any more. After my initial rise to fame I used to think I was different to everybody else and I worried about going out into the outside world. My obsession bordered on paranoia. But that's all changed now. I reason that if people are going to recognise me. I might as well look fantastic', says the singer who has earned more than £1m. Two other factors have contributed to the reformed Kim Wilde: a dynamic selfrespect stemming from her new role as a songwriter, and the support of her family.'

'I always felt that writing was what the music business was all about, yet I brainwashed myself into thinking I couldn't do it. Also, because Rick and Marty were so successful at writing, I felt intimidated by them. It wasn't their fault. They were constantly trying to boost my confidence. But now I've conquered my fear.'

Kim grew up in luxury in a Hertfordshire mansion which once belonged to Prince Bernhard of the Netherlands. Her mother was Joyce Baker of the singing Vernons Girls. With a former hearth-throb father, whose hits included 'Teenager in love', and a brother, Ricky, once promoted as Britain's answer to little Jimmy Osmond, she is well aware of her place in the dynastic scheme of things.

'My family are my emotional stability', she muses. 'I have my friends, but it is my family who have saved me from going under. I've grown up, too, not least in my attitude towards men. I won't let them get in the way of my career', says Kim, who has now split from her long-term boyfriend, saxophonist Gary Barnacle. She reflects: 'I have an intuitive feeling that things are going to get far more interesting. Maybe, one day, like Bardot, I'll even be a natural beauty. But I doubt it.' 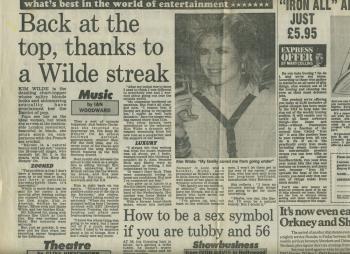 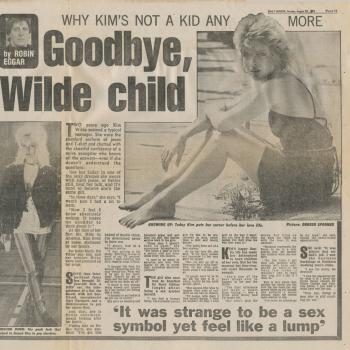