Being in love is losing a considerable time

At twenty-six, she is an old veteran of the charts. I must say that Kim Wilde spends all her time, her energy, her entire life on her career: besides music, for her, nothing exists!

Daughter of a pop star of the sixties, Marty Wilde, Kim has naturally followed her father's footsteps. At twenty years, she recorded her first single, 'Kids in America' and it's hardly surprising that it is a hit. Since then, duly chaperoned by his mother who serves as her agent, her dad who takes care of the production of her records, and even by her brother Ricky, who composed the music for her songs, Kim Wilde has recorded thirteen singles without ever leaving the charts.

She talks about the family business with as much simplicity as if it were a grocery flourishing. "I always wanted to be a singer, the rest seems to me secondary. In order to follow our dad, the rocker, we traveled the whole earth. We went to school during periods of rest. Sat near the window, I dreamed of being like Aretha Franklin. I rewrote the world in black and white, so Hollywood 1950. Since that day, for me, men should look like Humphrey Bogart and women like Marilyn Monroe."

Kim is now doing her third world tour, which will last nine months and get her through a dozen countries, always under the watchful eye of the Wilde family. At each concert dad and mom are installed at the front row; while one looks closely at the work of the orchestra, the other takes notes for discussion following each performance. Behind them is the sister of Kim, Roxanne, seven, and Marty, five years, their brilliant potential successors.

Over the years, Kim has gradually freed herself from family influence. "Now I feel free. I am grateful to my parents for helping me and guided, but now I know what I want not to follow their advice when I deem it necessary for my career."

She admits she has attended sessions of group psychology in a sect, EST, Erhard Seminars Training, through which she learned to know better and be more resolute in his convictions. "Very interesting things emerge when people describe events in their lives. I was very passionate about this experience. It was beneficial for me, helped me overcome some of my fears." EST, according to the "Mirror Week" is a movement strongly contested in England, because it uses conventional methods of brainwashing, and that it takes advantage of the misfortune of the people.

Anyway, it has learned her a lesson, it seems indispensable: "I know now that I need to be free. For example I do not feel any need to be in love. It happened to me several times, and it was great, but it loses a considerable time. I'm twenty-five years and I think getting married or have an ongoing relationship with a boy. It takes too much energy. I am perhaps too selfish to live this way. Foremost I want to take care of my career, and I have no leisure to devote to a man."

Laurent Voulzy is going to be disappointed, who wrote such a beautiful song of love for the beautiful Kim, "Mes nuits sans Kim Wilde." Even when she has been very nice to him because she agreed to appear in the clip Bernard Malige shot of this title. She even said she intends to come to Paris next spring. What is not known is whether the presence of Laurent Voulzy there is something. At most, we can say that the only French she ever mentioned the name is Christopher Lambert. "I've never met him," said Kim, "but I was told he was single. One thing I love about the French is their accent. When they speak English, it's really great! " 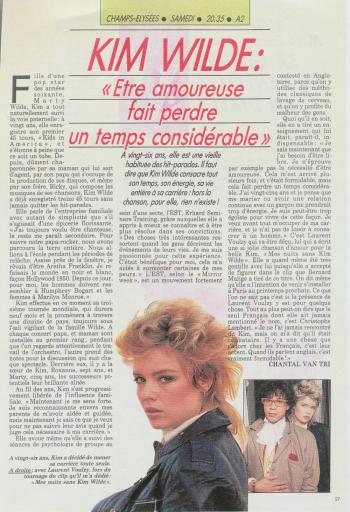