They said it couldn't be done. Top of the Pops, now virtually a national institution, has had the monopoly on chart shows since its first appearance 21 years ago - and it hasn't changed much since then, either. But now The Roxy has arrived and, to the horror of the BBC, it's near to beating Top of the Pops in the ratings figures. Lola Borg goes to Tyne Tees TV to sneak a look behind the scenes.

The week after the very first programme was on TV, the staff and presenters of the show suffered an all-time low. Although the viewing figures were high, the programme got a truly vicious slating.

"I'll never forget the deluge of bad Press", says producer Alastair Pirrie (ex-presenter of Razamatazz who originally devised the idea of The Roxy, he claims, when he was in the bath). "Probably we deserved it. But it was a very down-in-the-mouth bunch of pixies who turned up the following week with their bobble hats trailing in the dust."

New presenter, Kevin Sharkey, after his very first appearance on British TV, was named "Wally Of The Week" by ex News Of The World TV critic Nina Myskow. And, to make matters worse, they were only given the go-ahead for it three and a half weeks beforehand, and on the actual day of transmission the elaborate set was still being nailed together. It was that frantic. The programme hailed as a rival to Top Of The Pops was initially a bit of a flop.

Then, only nine weeks later, the situation turned around completely. In the last two or three weeks ,its viewing figures have hit seven million and are still steadily climbing, creeping up on Top Of The Pops.

"It's amazing", says a chuffed Kevin Sharkey reflecting the general opinion at Tyne Tees. "And they've had 21 years to become established. We've only had nine weeks. If I was working on Top of the Pops, I would genuinely be worried."

Most people assume that The Roxy is actually a theatre, deep in the heart of Newcastle - including Bruce Willis who, apparently, thinking it was an actual venue, rang the show saying he wanted to do a concert at The Roxy Theatre. It is, in fact, a monstrously huge set, complete with a real entrance, to give the audience the impression they are going into a gig. Housed in the Tyne Tees studio where the infamous Tube used to be, it looks magnificent, but if by chance you get close enough to the intricate, gold ornamentation, you're likely to discover that - eek! - it's made out of rubber.

The presenters - Canadian David Jensen (known as Kid Jensen in his youth) and Kevin Sharkey (a man who only one year ago was working as a cleaner) - are only there for the Monday, when they do their links (usually several times, and when they get them right the crowd cheer gratefully).

Each time The Roxy is recorded, a live audience whoop it up. Three DJs and a warm-up act from a local nightclub have the sole task of whipping them into a frenzy by forcing them through their paces with dance routines, such as the Star Trekkin' dance. They are, apparently, usually completely exhausted by the time they roll out at the end. But, then again, it's all good fun. 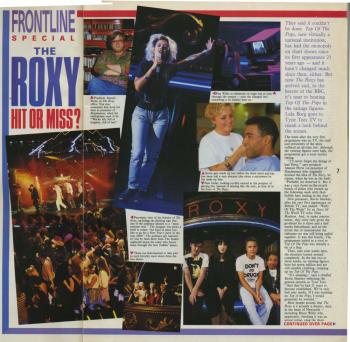 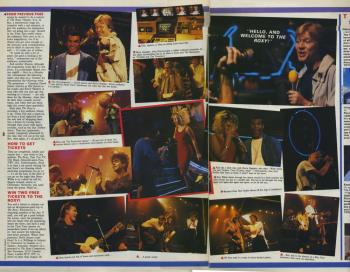