On the way to 27, she seemed finished and burned out two years ago. Now on the road to greater success than she has ever experienced.

"Well, to be honest, it wasn't my liking either that 'You Keep Me Hangin' On' was chosen as the first single from 'Another Step'. It was the record company's choice. I would have taken a completely different song, Kim Wilde said to Vi Unge, when she was in Denmark about half a year ago.
Fortunately, the record company got its way!

First, the song became a hit in England. And then in most of Europe. And now, many months later, it has become a giant hit in the United States! That's just all Kim Wilde has dreamed of. And, of course, it won't be that Kim at home in England scores another hit in a duet with Junior - "Another Step Closer To You".

- There you can just see, says Kim today. 'You Keep Me Hangin' On' is an old song, it's actually the third time it's on the charts. That's why I didn't think it had a chance. First it was a hit with Diana Ross & The Supremes, then with Vanilla Fudge. I loved the first version and hated the second one. Obviously, there's a whole new generation that doesn't even know the song that have succumbed to my version.

For the past 18 months Kim has been almost as much in France as in England. She has never hidden that she loved the country - the charm, the wine, the maturity, the cosiness, the food, the climate. On the other hand, she has tried to keep secret that it was a musician friend who was the main reason for the trips across the Channel. That relationship is over now - with good conscience she can say that the rest of 1987 is reserved for professional ambitions. There will be plenty of flight trips to the US, where TV shows, interviews and an autumn tour await.

Kim has never been the totally breathtaking hit in France and has therefore been able to drive reasonably undisturbed on the streets. She'll miss it now. Last summer she could even lie topless by the beach and get sun on her body - no soul took notice. That kind of pleasure is going to be a nuisance this summer. Now she is too familiar again - and too busy.

- I reckon I've learned a lot from the mistakes I made when I first broke through, she says.
- Back then I was really directed. I had no idea and was willing to rule. Money was okay, because I had my father and brother to help me - and I still have money on the bank book from that time. Furthermore, I have had my own record studio - and a large, good and reasonably luxurious apartment in London.

A lucky finder can either try to blackmail Kim Wilde - or make a good deal with a book publisher. Kim Wilde recently lost her most intimate personal property: a thick diary filled with record day by day, about all that has been obtained of her exclusive notes on all the guys she knows.
There really is dynamite in that book, and Kim happily donates 10,000 crown to have it back again, should you find it - but one that hasn't come to fruition. - I give guys grades 1 to 10 - and I have poems in the book that come in handy.

It is said that there are newspapers that will give DKK 10,000 to get the book, but it's still gone.

Maybe someone is waiting for them to top the LP hit list in the US - to fire it off when the market price is highest from the small detail, Kim Wilde thinks it's a brilliant summer.

- Last year I thought about a transition, that perhaps it was time to become a mother. At least those plans are now postponed for a few years. I do want kids, just not right now. 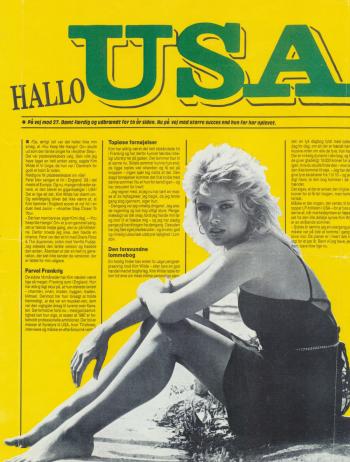