Kim Wilde is on a promotional tour - of zoos. But there are no animals in these establishments. She is enjoying her first Top Twenty hit in America for six years - the aptly-titled (You Keep Me) Hanging On. And part of the price she has to pay is appearing on America's "morning zoos", the local radio shows where anything goes.

There are plenty of traps for the unsuspecting pop star. As Kim settles down in the air-conditioned hum of radio station KPLZ Seattle the local disc jockey drops the first bombshell. "Mr. Wrench, our car mechanic, couldn't make it this morning", he smarms into the microphone. "So we have a lady called Kim Wilde to solve your car maintenance problems."

Recounting this story in Sushi on Sunset, a shabby Japanese restaurant on Hollywood's Sunset Boulevard, Kim's Jaggeresque lips gape in mock astonishment. "All these people were phoning me up and asking me what to do with their distributors, tappits and big ends", she explains. "So I started bullshitting. This guy rang and wanted to know about the air pressure in BMWs, so I made up something called the Air Displacement Theory. He seemed happy enough!"

Kim laughs - a rasping, fullthroated cackle which, along with her general disregard for "image" or "credibility", has shaken American record executives looking for an easy New Blonde Bombshell tag.

"Some of them mention Madonna - 'ah, she's gonna be the new Madunna'," explains Kim, slowing into a cheesy American drawl. "And I say, 'well can't you just enjoy what I do and enjoy what she does and stop trying to make comparisons?' I don't think I could give as much energy to the image-making process as I believe Madonna must do. It doesn't hold that much interest for me. I'm really very lazy about clothes. I'm very aware of what clothes to buy for me, but from an image point of view, I run a million miles from it." Kim's trepidation about image is scarcely surprising.

In 1985 she was pulled out of the familiar biker jacket and jeans in which she had enjoyed hits such as Kids in America and Chequered Love and eased into a tight rubber-dress and six inch stilletto heels.

"Suddenly I started reading stuff about me being finished and about failed comebacks", recalls Kim. "And it really upset me. But at the same time I knew that what I was working on for the future was very good and I had faith in it. Things are more on my terms now than they've ever been and that's why I feel really good about cracking America now."

"Cracking", though, is probably the wrong word. With Another Step a Top Ten hit in the UK too - it's a duet with telented black singer Junior - Kim, now 26, is charming America with a cool confidence.

"Today  IUwas on the KIIS FM station and I just said, 'Hi, I'm Kim Wilde. I'm a reserved and understated British person'. And that's the truth. Compared with what people do to get attention over here in America, I am reserved and I think they'll get to like that. I'd like to import a bit of British understatement. It could be the most poignant thing I have to offer them."

That seam of British reserve peeks through constantly. With her her shoulder-length blonde hair, black and white striped rock 'n' roll style Fifties shirt, Kim looks made for the sleek convertible she weaves deftly along Hollywood Boulevard. But this is only her second trip to the US - the first was a short promotional trip for the hit single Kids In America - and she remains overawed.

"It's such a big country", says Kim, who is accompanied on this trip by her brother, Ricky, and a tall, ginger-haired youth called Nick, who helps Kim's mother organise her business affairs.

"I keep saying, 'where are we now? North? South? We were in Phoenix the other day - in the middle of the desert - and I'm saying, 'is there a beach round here?'."

She has a calm and controlled private life too. She's close to her father, ex-rock star Marty, her brother and her younger sister - and is looking forward to a new addition. Her 46-year-old mother, Joyce, is pregnant again. "I think it's wonderful", says Kim. "It's just someone else who has to love me."

That love is beginning to find reflection in her music. "I wrote a song called Schoolgirl after Chernobyl", she says. "That was just dreadful and I was very, very depressed. I've got a seven-year-old sister and I felt, personally, very guilty for my generation and all those that are in positions of power, because my little sister is not in a position at all at this stage of her life. I thought, 'what am I going to say to her when she grows up and asks me why I let it happen?'."

Kim says she cries a lot. "Most of the things I've cried about recently have been things in the news", she says. "The ferry disaster, Chernobyl and when they polluted the Rhine - stuff like that." But Kim is less openly emotional about her love life. Her affairs are few and fiercely protected - "There's not many of 'em, I can tell you!" - and she recalls them with the coy breathlessness of a teenage magazine article.

She split up recently with Claude, a young French musician she met during a television recording session on the Indian Ocean island of La Reunion. And for three or four years before that her name was linked to British saxophonist Gary Barnacle. "I tried to keep that one a secret for as long as possible", explains Kim. "I wanted to take care of it, to look after it."

In Phoenix, though, she had her first proposal of marriage. "It was this young guy called John, who I met at a gig in Lisle", says Kim. "And he was so cute and handsome and lovely and there he was - in the middle of the desert - giving me my first-ever proposal of marriage. I really did think about it. I thought, 'why not?' But he doesn't like Prince", she adds with mock aloofness. "I couldn't trust a man who doesn't like Prince."

Back in the cream and chintz of the Sunset Marquis Hotel, a champagne cork's flight from Sunset Boulevard, Kim, Ricky and Nick celebrate Kim's performance at The Palace Club and begin planning a short American tour, possibly with Junior as the support act. "Part of me believes my success here is going to be long-term", says Kim. "And there's another side that's skeptical about it lasting beyond the day after tomorrow."

However long it lasts, Kim's success is fused with a candid down-to-earth attitude which seems barely to have changed since she burst into tears in 1981, after her first live appearance in Stockholm. "Ricky", she calls across the table, trying to answer a journalist's question about her international success, "Just how many countries in Europe have I got by the short 'n' curlies?" 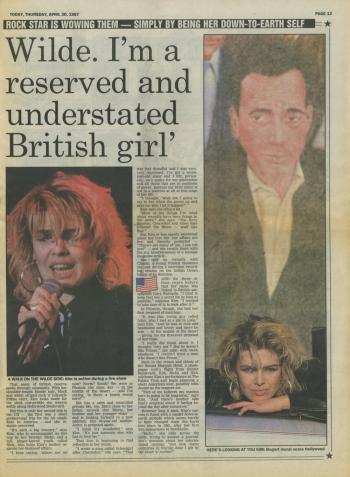