Kim Wilde may be an international singing star but she's still very much a North Herts girl at heart. She talks about her home life, family and career to Mark Norman.

When people talked about rising star Kim Wilde, every opening sentence was inevitably prefixed with 'Marty Wilde's singing daughter, Kim...' But today it is more likely Marty's name is added more as an afterthought than anything else. And that is something he is no doubt delighted about. Kim has proved that her success is forged very much through her own hard work, dedication and considerable talent. For someone so young she has handled the peaks and troughs of her short career with deft realism and maturity, refusing point blank to be be drawn into the superstar mentality.

You get the impression that the Tewin girl with the Bardot looks was dragged screaming and kicking into the glare of publicity rather than seeking it out like a moth to a light. She said: 'I just wanted to sing. All the fame and the success is a bonus for me.' The Wilde explosion, which began in 1981 with the release of 'Kids in America', has been very much the result of her solid home life. Make no mistake, Kim Wilde loves her family. The Wildes moved to Tewin when Kim was nine years old. The trappings which came with Marty's success were eveident, but not prominent, and her first years in the area were spent at Tewin Primary School. She said: 'I made a lot of friends while I was there. I first met my bes tfriend while I was there and I still see a lot of those friends because they live in London.'

From there it was on to secondary school near Hertford and even though she has now moved to North London she still puts a lot of store by family life in North Herts. She said: 'I spend a lot of time at home and at the studios in Knebworth because I still think of Hertfordshire as my home and I value my family.'

Managing Kim is very much a family affair. her mum, Joyce, manages her while Marty and brother Rick co-write her songs with her. The inspiration behind much of kim Wilde's success is her brother Rick, who co-wrote Kids in America, her first single, and much of the last album, Another Step. Kim says of her brother: 'He is such a talented guy and has been writing songs for a long time. I owe a lot to him and my dad.' After Kids in America hit the number two spot Kim released a string of first class singles which never quite got her the recognition she deserved. In many cases that lack of 'success' has proved to be the nail in the coffin for some artists. But not Kim Wilde. She is a fighter whose down-to-earth view of the music business has helped her to bounce back. The first song she ever wrote was 'Another step', the title track f the album and the second single from it. Not a bad start really considering it got to number six here. The whole of the album was recorded in Marty's Select Sound Studios in Knebworth and over in Los Angeles and features on track 'Missing' produced by Kim and Rick together.

There is a feeling that Kim's first album titled, quite simply, 'Kim Wilde', was in many ways the reason behind the lull in her career until 'You keep me hangin' on' last year, another number two hit. It is said that the first album was so advanced musically in tearms of what was going on around her at the time that she was always going to find it difficult to match that success. To some extent the 26-year-old agrees. She said: 'Certainly that could be true in the fact that the ideas we were trying out and the approach we were using at that time was totally different to anything that had gone before.'

'But I tend to look at my career fairly realistically. You have to take the good with the bad and like I said, the success is a bonus.'

The popular press has been having a field day with Kim's recent revival in the charts with stories of numerous romantic ties. Julian Lennon's name even popped up at the last Montreux Festival. But Kim just laughs it off. She said: 'I don't mind too much. Most of it is pure speculation and the majority of the time it's meant in good faith and is rarely malicious. I have a lot of fun with the press and I feed them little titbits of information. It's much better that they're writing about you than not.' But having said that Kim's private life is exactly that. She has a burning contempt for starlets who play on their personal life to get to the top.

She said: 'People who can't get to the top on their own merits and are reduced to playing on the tackier side of their lives really do have problems.' So things at last are looking good for Miss Wilde. Two top ten hits since the autumn and another single, 'Say you really want me' released on Monday have given her the foundation on which to stand high above her contemporaries. And there's no doubt that what Kim Wilde wants Kim Wilde will get. and to steal the title of one of her songs, she's not doing it for the money, but for 'The thrill of it'. 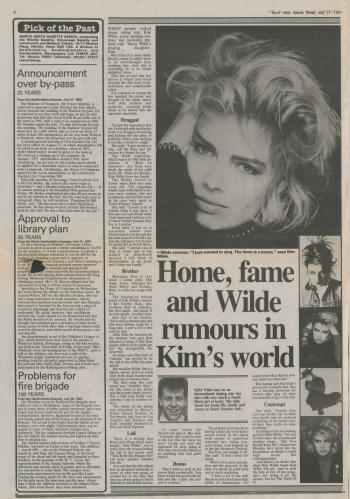