Is Kim a radio victim?

I have come to the conclusion that there is a conspiracy against Kim Wilde. No, really, I'm serious. Look, if you will, at the facts:
First, Kim releases four astonishingly good singles in 'View From A Bridge', 'Love Blonde', 'Rage To Love' and now, 'Another Step' (the title track from her latest album).

All of them have bombed (all right, so 'View...' got into the Top Twenty, but it deserved to go higher and maybe it's too early to talk about 'flops' with "Another Step").

However, the self-same Kim Wilde got to number two with "You Keep Me Hanging On", a song immortalised by the Supremes some twenty-odd years ago.

"Another Step" has received limited airplay from fickle Radio One DJs despite featuring the highly accomplished vocal talents of not only Kim but also soul genius Junior. So what's wrong?

Kim appears to have fallen foul of the powers that be in BBC radio for some reason. I don't know - maybe they don't like her face. North Herts, your Kim needs you. Buy the record.

It seems that if a song wasn't written by prehistoric man then the radio people don't want to know. At least Kim is at number one now, even if she is sharing the position with about thirty other musicians. 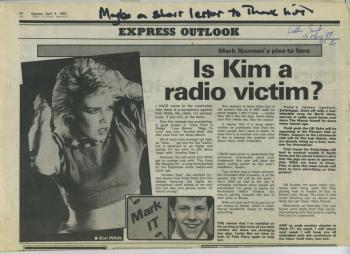