Wilde might be blonde, beautiful and youthful, but she is also an extremely talented songwriter and singer. Her latest album 'Another Step' (WEA 3579-1) notches her one more step up the ladder of success, proving yet again she's more than just a pretty face. 'Another step' is finely crafted, much stronger than her successful singles 'Chequered love'and 'Kids in America'.

Wilde lulls you into a false sense of melody with the delightful whooping of 'Schoolgirl' then hits you like a ton of bricks with shock rockers like 'The thrill of it' (featuring a brooding 'Smoke on the water' type bass line) and the power pop 'Hit him'. 'Say you really want me' lives along to some excellent, funky percussion work while 'Missing' (with its Spanish acoustic guitar plucking) and 'Don't say nothing's changed' placate the listener with pensive, gentle meanderings.As usual, Wilde draws on the talents of brother Ricki, who produces some numbers as well as co-writing, and dear old dad, Marty, who also writes some tracks. Kim is out to prove being a female singer does not mean she should sing wimpy love lyrics about the leading men in her life. Her feminist leanings are all there in black and white - 'The thrill of it' shows she can be as superficial about love as any macho on the mke and the old Diana Ross hit 'You keep me hangin' on' has been adapted to show a stronger woman. The final line, screams 'get out of my life'. 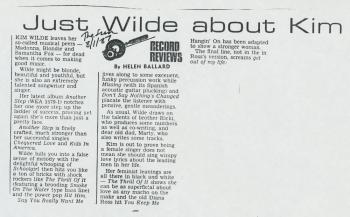