More than 100 Hitchin youngsters sang birthday praises to celebrate the Caldicott Centre's first anniversary last week, but one voice ran out above the rest.

For special guest at the youth centre in Highbury Road, Hitchin, was pop star Kim Wilde, who chatted to staff, leaders and members for an hour.

In between conversation and a never-ending stream of autograph hunters, Kim managed to cut the centre's first birthday cake, which was made by staff and decorated by members.

Youth and community officer Mary Wild said: "The Centre was absolutely packed out but Kim took it all in her stride and chatted away for an hour."

The Caldicott Centre was one of the storm damage victims last Thursday when a tree fell, damaging brickwork to the building. 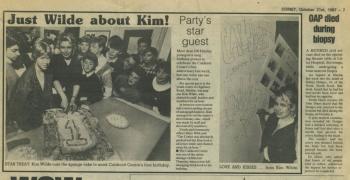