The sun is coming down over the Aegean Sea as pop star Kim Wilde and myself relax on the balcony of her hotel suite in exotic Cesme, Turkey. 'Oh this Is great, Isn't It? Just watching the sea, it's beautiful," Kim sighs as we talk. While she pauses to admire the picturesque Turkish landscape, I take the opportunity to concentrate on her own striking features... That delightful shock of blonde hair, her flawless complexion, blue eyes and those sexy, generous lips... truly a beauty to behold. The French, whom she adores, call her the 'Bardot of pop'.

"God, what a thing to live up to," Kim laughs when I refer to her flattering title. "Count the pounds... I certainly don't see myself like that... I mean, I wake up with myself in the mornings. Some mornings I think: 'Oh, you're quite sweet! But mostly I don't. I'm not terribly impressed with my looks. I'm very self-critical."

Kim might not be terribly impressed by her looks, but hot-blooded males like myself certainly are. When she gyrates her voluptuous body in videos it drives us wild with desire. So imagine how I felt when I found myself dancing with the blonde bombshell in the flesh at a Turkish night-club last week ... Some guys have all the luck... but what a pity it was all in the course of duty and she was soon whisked away by her 'minder'. Kim Wilde, as I discovered. is a very down to earth girl. She's not temperamental like many of her ilk but laughs easily and is a joy to talk to.

"I'm a very positive parson," Kim explained. "I don't talk bullshit". A daughter of seventies pop star Marty Wilde, Kim has a wholesome image. She hasn't figured in any scandals in the British tabloids. But she admitted to me: "The wholesome side of my public persona isn't all as it should be, obviously. It never is. I mean it never is. None of us is perfect. But I choose to keep my private life as private as possible. I guess I learned that from my dad who always kept his private life separate from his public one. I don't try to get cheap publicity from an affair or something. I would hate to be known for that kind of thing."

Kim revealed to me that there's no special person in her life at the moment, although she once had a long-standing relationship with saxophonist Gary Barnacle who was a member of her band. She says she's incredibly selective in her relationships and always has been. "I know lots of people who aren't, but when I give myself I want it to be really something special," she says. Sex, Kim admitted, is not very important to her at the moment, but she enjoys talking about it - especially with me. "I do like talking about it a lot. I find it very entertaining", she said. And she told me: "I'm very happy to be single at 26".

Kim says she's never seriously thought about marriage with any of the guys she's been involved with. "Maybe once, but maybe not." Marriage, she told me, doesn't appeal to her at the moment. "I'm really into the monogamy of any relationship. That's not what puts me off. I think from my point of view, from lots of the relationships I've seen, they've been about one or the other person trying to change the other person into something that they want them to be. That's been my experience to a certain extent. But my mum says: "When you meet the right guy you'll know. So I always listen to what my mum says because it seems like a sensible idea."

Kim admits that she's "very career minded and a very independent sort of person." I pointed out that it might be difficult for a man to cope with her putting her career before him. "Maybe, yeah", she says. "I don't think so, though. I don't think it's down to me. I think it's down to them that things go wrong. I mean I've retained an eighteen to nineteen year old relationship with my friends. I know what maintaining a relationship is all about. I know about the give and take of that. I know about respecting someone's wishes, about supporting them when they need it, about being there, about caring about them, about letting them know that you know that they care. I know about being with all kinds of people. I know how to make relationships work. How they can be so enriching to your life. So when I'm in the company of someone and it's not good, I know it's not me."

I suggested that there's a difference between maintaining a relationship with friends and one with a lover. "I suppose my problem is that I don't differentiate", Kim admitted. "I would like to have exactly the same relationship I have with people I love now, with the guy I'll eventually marry. So that person, too, would be a very good friend of mine - but maybe I'm expecting too much. It's not something I'm overly worried about, though. I love the freedom of being single. You don't hurt anyone that way and you just have lots of fun. It's less complicated. Life's complicated enough for me at the moment without personal traumas to make it more so."

Kim, who scored her first big hit in Britain back in 1981 with 'Kids in America'recently topped the American charts for the first time with 'You Keep Me Hangin' On'. Has she now achieved everything she's ever wanted? "No, having a hit in America is just the beginning for me - it's just the beginning of maintaining success in America", Kim told me. "To me I'm more proud of the fact that I'm around here talking to you six years after making a record, 'Kids in America', which went to No. 1 all over the world. In a business that's as fickle as this, being around for two years - not alone nearly seven - is a feat in itself.

After observing how Kim was surrounded by hordes of photographers as she tried to boost her tan on the beach in Cesme, I asked if she found it difficult being a star and the centre of attention. "I don't take too much of it seriously", Kim told me. "After making records for six years there have been times when they haven't rushed to take my photograph, rather they've rushed to the girl who's been on the same show as me. I know what that feels like and I also know what it feels like sitting out there having fifty photographers standing around. I prefer having the fifty photographers around, but I'm also able to look at it for what it is."

"My dad always says to me: "If you can look at success and failure for the imposters that they both are, then you're doing alright." I try to do that, but sometimes I like to have fun and treat it as a little adventure before I come down to earth again.  Sometimes you can have fun being drawn into that by an imposter. It's like women being drawn to a cad - you know he's bad, but you know he's fun to be wit hand that's what fame is like. So, it's the great seduction."

Kim is very close to her family. Her brother, Ricky, and father, Marty, help write her hits, while mother, Joyce, looks after her business affairs. "We're very family orientated, but not to a smothering degree", Kim told me. "I live on my own in London, but they're only an hour away from me. The whole Kim Wilde thing is a family affair and has been all the time and it's stronger now than ever. I have a fabulous relationship with my mum. It's really great, actually. I think I get on better with her now in the last few years than I've ever done in my life. I'm sort of adult enough now not to take everything she says personally. As you grow up there's usually quite a lot of conflict between girls and their mums. Now she's really my best friend."

Looking to the future, Kim says she's very career minded. "I am now and can imagine being that way for some time. But I also see a day when I'll just look at it and think: 'That's enough of that'. I'm a very impulsive sort of person and I make decisions very quickly about very important things."

But, sad to relate, after popping the big question to her, Kim decided to keep me hanging on...

Dublin-born Maura Robinson of MCA Records has the enviable task of looking after Kim Wilde on her whirl of promotion appearances. Maura, who hails from Cabra, told me: "She's the nicest person I've ever worked with. Some of the stars I deal with can be real monsters, but Kim is a darling." 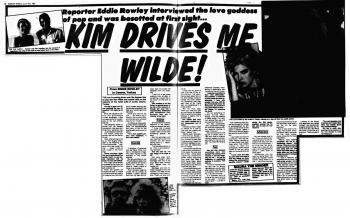