Kim Wilde, voted Europe's top female pop singer, hates talking about herself. So we found out what she is like from the people who know her best - her mum and dad.

Father Marty, the British rock 'n' roll hearth-throb of the late '50s and early '60s, says: "Kim couldn't care less about material possessions. She behaves the same way now as she did when she had nothing."

He told her it was about time she got herself a car, maybe a Rolls or a Mercedes. She said she wasn't interested, but he insisted that a busy girl like her needed a car to get around. So she said, "All right, get me any old thing - I don't care as long as it goes."

"That's typical of her", said Marty. "If all the fame and fortune were taken away from her tomorrow and she was back where she started, she'd just shrug her shoulders and wouldn't give a damn."

Despite making more in a year than most of us earn in a lifetime, 25-year-old Kim is very careful with her money. "She's not mean, just sensible", said Marty. "She's the kind of girl who will go out of her way to buy a cabbage across the road that's 10p cheaper."

Marty's wife Joyce, also a singer, said: "I've often tried to persuade Kim to buy pretty clothes that catch her eye when we go round the shops, but she won't even let me treat her to any. Next thing you know she's come home with a complete wardrobe from Oxfam for about £3 [HK$60]! The only time I've seen her in a really pretty dress was at her 21st birthday party."

The Wildes live in a beautiful thatched house in Hertfordshire that once belonged to Prince Bernhardt of the Netherlands. Joyce says she will always keep Kim's room prepared so she can come and stay any time.

"Mind you, Kim prefers living in a tent in the garden", Joyce said. "She reckons that's much more fun. She takes her sleeping bag and frying pan with her, cooks up sausages and has a great time - even when it's pouring down. When she's been on tour and stayed in some beautiful big hotel, she comes home and says, 'It was all very nice, Mum, but I prefer my tent!"

Her mother explained that Kim has always wanted to be accepted as one of the crowd. She used to go through hell at school because she came from a family with money. One of her most upsetting moments was when a girl stood up during a school debate and asked what right Kim Wilde had to live in a great big house. "Kim felt terrible about that", said Joyce. "And when she went to art college she would never let on that she was Marty Wilde's daughter. Even her best friends were not told. I'd let her take my Mini to college, but she'd park it well away so none of her friends would see her in it and think she owned a car and was well off. They didn't own cars and she so badly wanted to be like the rest of them."

Joyce and Kim behave more like best friends than mother and daughter, but there were times when they had terrible rows. "I'm very determined, strong-willed and independent - with a bad temper", said Joyce. "And unfortunately Kim takes after me. One day she gave me a mouthful. I went mad and chased her out of the house, shouting at the top of my voice. I was about five months pregnant and she was too fast for me. If I'd caught her I'd have killed her! Later that day she phoned me. She just said: 'Mum, I think we are too much alike.'"

Men upset Kim Wilde at their peril. At a paty one lad kept being rude to her - so she got up and gave him a black eye!"

Her great hero is Elvis Costello. But she has never met him and does not want to. She told her mother, I'd be so nervous, I'd make a complete fool of myself!"

Kim nearly died of meningitis when she was eight. Marty said: "We knew if the disease didn't kill her she'd probably be left with permanent brain damage. It was the most terrible moment of our lives. But when I got to the hospital Kim was standing up laughing and joking!"

Doctors explained that Kim's life had been saved by a matter of minutes. They had given her a lumbar puncture just in time and taken off the deadly fluid before it could reach the brain. "People who are lucky enough to recover from meningtitis are nearly all left with some small defect", said Marty. "With Kim it was a malformed front tooth which she later had capped. It was a small price to pay."

Kim was already a keen singer at the age of 11, so Joyce and Marty decided to let her do a number in the middle of one of their acts at a plush hotel. And she stole the show from her mum and dad! "It was her showbiz debut", said Joyce. "She sang 'Country road', the Olivia Newton-John hit, and got a standing ovation. Marty and I couldn't continue with the act for several minutes. 'How do you follow that?' he asked me. It proved the old show business saying about never working with animals or children."

When Kim was 14 she saved her dad form an amorous fan. Joyce said: "The girl entered the dressing room after a show - she grabbed Marty and started rubbing herself up against him, making it obvious that she fancied a lot more than his autograph - and all in front of his 14-year-old daughter.

"Sunddenly Kim went up behind the girl and gave her a mighty kick up the backside. 'Oops! I'm awfully sorry', she said in answer to the howl of protest. 'My foot must have slipped!'"

It was the last they saw of that fan. 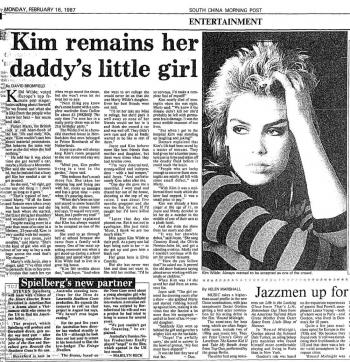