'You Keep Me Hanging On' and 'Another Step' have re-established Kim Wilde in Britain and carved a way into the lucrative American market. Kris Kirk finds that she has remained true to her roots while strengthening control over her career.

'I'm not a sensational star like Boy George, and I'm not weird and inaccessible like Kate Bush.' Kim Wilde figures she's somewhere in between these two music business extremes.

'I don't think I impress people that much 'cos I'm quite ordinary', she says. 'A bit glam and a bit sexy and all that, but I think people basically just think of me as a really nice girl. Which I am, of course!' There's always the temptation to think that fluffy blondes come with fluffy brains, but Kim Wilde is nobody's fool. Back in the charts again after a dangerous couple of years without hits, 26-year-old Kim has grown into an astute young woman whose eyes have been opened wide since her first hit, 'Kids in America', six years ago.

'I was very naive when I began working in the music business', she admits, 'but I can see now where the roots of destruction lie. Most people go into the music industry because they like music and they end up being destroyed by the business side of it. I was terribly innocent at first. To me the music business meant going on the road with my father, Marty Wilde, watching him pick up his guitar and sing to everybody, hanging out with him backstage, driving miles with him in the middle of the night and listening to music in the car. But the business side of it has been an education. I've just read Simon Garfield's book, Expensive Habits, about corruption in the music industry, and it's such an eye-opener to see how people like Hazel O'Connor were exploited. Unscrupulous people thrive in the music business perhaps more than any other, and sometimes my mum - who runs my management office - tells me things and my mouth drops open. You just have to make sure you're well informed about all facets of your career. After I read the book I became so incensed and determined to know everything about my life - not just the parts that gave me pleasure, like singing and writing.'

Because, Kim's career has been nurtured by her showbiz family - ex rock 'n' roll star father Marty, ex-pop singer mother Joyce and writer/producer brother Ricky - she's had to fight hard against the assumption that she's just a pretty puppet. 'I did get flak from people who thought all I had to offer was a pretty face, though I never got slammed quite as Clare Grogan and many of our contemporaries. But that's one of the reasons I began writing songs, to prove I could do more than just shake my backside about. I was very nervous about it at first, being surrounded by a family of excellent songwriters, but it's beginning to work out and I think my latest single with Junior, "Another Step", which I wrote, proves I've got a little more to offer than just a face and a voice.'

Yet she's still primarily regarded as a sex symbol: how does she handle all those drooling men? 'I don't spend too much time thinking about it! I like to be sexy with certain men I want to turn on, of course, like most women do. But I don't understand the concept "sex symbol", and when I look at pictures of the latest guy being plugged as "the most handsome man in pop" they usually leave me cold. The only person I'm really nuts about is Ben Elton. Sometimes he goes on a bit and I know he's really angry about living in this country and I can understand his anger, but he's much funnier when he doesn't. I know he and I may be poles apart on fundamental issues, but maybe we'd touch somewhere on a certain level, because he really cares about things and so do I. He's funny; he makes me laugh, and I like men who make me laugh.'

Do you manoeuvre men?
'I guess I can manoeuvre the ones I'm not mad about, but not the ones I am.'

In the main Kim has managed to avoid the gossip columns of the sleazier press. 'That's because I'm not a sleazy person. Besides, I don't go out to clubs much and if I do it's with my tribe of girlfriends. And I never present myself at the door and say, "Let me in, I'm Kim Wilde" - I fork out, like everybody else. But basically I keep my private life to myself; I'd hate to try to win over the nation by always being seen with great guys. I think it's so sad when you see girls selling their confessions to the tabloids. It's so pathetic that they can talk to anyone as shallow as the gutter press about their private lives, and I think some of them don't realise how they're prostituting themselves and what a valuable thing they're giving away. Maybe they value their Rive Gauche jackets more - they wouldn't give those away.'

There's an honesty about Kim Wilde that makes a welcome change from the average pop star: she's ready to admit, for example that her career was very shaky for a while there. 'Part of it was because there was a lengthy reshuffle at my record company, big changes that were very destructive to us for a time. But my family and I also went through a period of assessing what we were doing with my career., I was less successful and we had to come to terms with it, wondering whether we had to throw away everything and go somewhere else. But I'm glad to say we just worked on it and made it happen again.
'We considered moving away from my brother producing and writing my material, we considered going to America, we went through all these ideas about changing my image, but in the end we decided it was all too entrenched just to throw away. And I'm glad we hung on because 'You Keep Me Hanging On' was one of my biggest records ever, and now America is knocking on the door.
'I had criticism from people for doing a remake of a Supremes single, but I think I personalised it - you definitely get the feeling there's no way the guy will get a second crack of the whip, that he's screwed up bad and he's out. That record was typically me. If someone crosses me, they're dead! I'm not a vindictive person, but I've wasted time before giving people second chances. And nowadays if someone does me wrong, they're out - that's it.'

Tough talk, though Ms Wilde is not quite the career-obsessed tough cookie that Madonna obviously is. 'I admire Madonna's commitment to her work, but at the same time I think there's something a bit unhealthy about being quite so wrapped up in your career. I love what I'm doing, but I think to get that wrapped up you need the commitment of a nun and I'm not like that... I sometimes wish I was.'

Kim is presently surrounded by babies - her mum, sister-in-law and best friend have all recently given birth; does she anticipate being a mum in the future? 'Let's just say babies are a dot on the horizon', she laughs. 'They're a twinkle in some father's eye, I'm sure. Whoever he might be....' 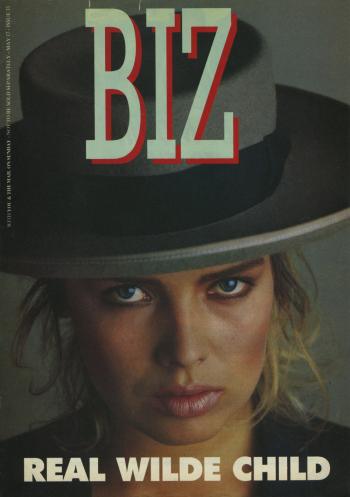 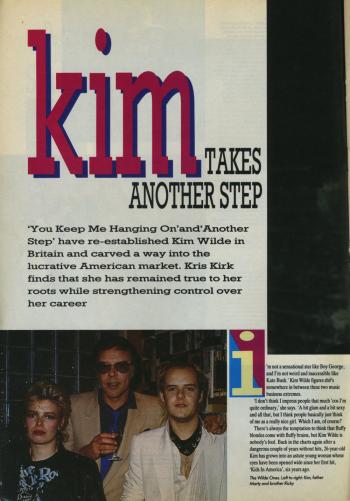 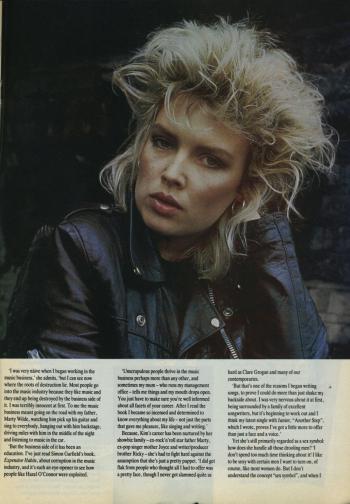 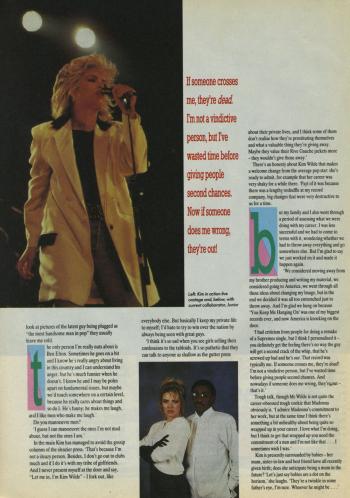