Five years ago, Kim Wilde launched her career with the meteoric success of her single "Kids in America." Selling over two million copies worldwide, it established the then twenty year old English singer as a force to be reckoned with. Four albums and a dozen international hit singles later, she has now truly come into her own with her newest album, Another Step. The crucial change is that Wilde was involved in writing eight of the LP's twelve songs. "My early career was based a lot on image but I always felt very strongly about being musical," she said. "I have a real love of music and when you do, you simply have to write it."
Music has always been her lifeblood. Her father, Marty Wilde, enjoyed a successful English career as a pop singer and later wrote and produced for other important acts there such as Lulu and Status Quo. Kim's brother Ricki (younger by a year) co-wrote several songs on the LP and produced eight of them.
The two sides of the latest album reveal two complimentary sides of Kim Wilde. It begins with a set of furious, molten rock and rool lead off by a relentlessly propulsive cover of Holland, Dozier & Holland's classic "You Keep Me Hanging On". "I'm supersitious and made a point of not listening to any other versions after Ricki suggested we cut it," Kim recalled. "My approach was purely instictual. My memory of the original is that you get the idea she's going to forgive him. In mine, there's no way that'll happen. I think it's more reflective of relationships in the eighties. It's tougher.
Wilde's tough "You Keep Me Hanging On" went to Numer Two in the U.K. and has topped the charts in Australia and Norway. Needles to say, it also did well in the United States.
Wilde has proven that she's more than just a pretty face (and is, by the way) - she's a pretty talent! 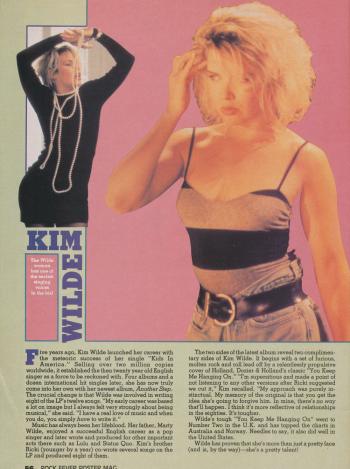