It may have been Madonna's year. But there is another sexy blonde female singer for whom 1987 has been a year of brilliant achievement - Kim Wilde.

After a couple of shaky, dangerous years when it seemed she was in danger of fading away, Kim has crashed into the American charts in a big way, established herself as a songwriter of great talent, enjoyed a spell as a sultry sex symbol too hot for TV, and received her first proposal of marriage.

It was in Phoenix Arizona that a young guy called John popped the question. Kim had met him at a gig and she says: "He was so cute and handsome and there he was in the middle of the desert giving me my first-ever marriage proposal. "I really did think about it. I thought 'why not?' But he didn't like Prince. I couldn't trust a man who didn't like Prince! I don't know what my ideal man is. But if I met him I'd grab him and never let him go. I'm in no hurry to settle down. There's no pressure.

I haven't met the ideal man. So far there has always been something wrong. There are a lot of qualities in my father I would admire in anyone - his sense of humour, his intelligence. But don't think I go round looking for someone just like him."

Her father is, of course, Marty Wilde who had a string of hits in the Fifties. And he can take much of the credit for guiding Kim's career back on to the right tracks.

Kim says: "My family and I went through a period of assessing what we were doing with my career. I was less successful and we had to come to terms with it wondering whether we had to throw everything away and go somewhere else. But I'm glad to say we just worked on it and made it happen again.

"I had started reading stuff about me being finished and about failed comebacks. That really upset me. But I knew what I was working on for the future was very good and I had faith in it. It's not by luck that I am still here six years after my first hit single. I have worked really hard and so has everyone around me."

The dramatic change in Kim's fortunes came about first with her number one single You Keep Me Hanging On. It was a massive hit all over the world and hit the top in America. This was followed by Another Step, her hit with Junior which was also a smash in America. It was penned by Kim and taken from the album Another Step which showed Kim's song-writing was really starting to blossom. And that has given her immense personal satisfaction.

She says: "I'd got flak from people who thought all I had to offer was a pretty face and that was one of the reasons I began writing songs - to prove that I could do more than just shake my backside about. Another Step proved I've got more to offer than just a face and a voice."

So why did she film such a raunchy video to accompany her hit Say You Really Want Me? "Every woman at some point in her life likes to feel she is a sex symbol whether it's for her husband or her boyfriend," is Kims reasoning answer. "But you would need to be a bit queer in the head to carry it off and believe it all the time.

"I don't think I impress people that much because I'm quite ordinary", she insists. "A bit glam and a bit sexy and all that, but I think people basically just think of me as a really nice girl. Which I am, of course!"

At the age of 26 Kim has come a long way from the green nervous newcomer who burst into tears with emotion after her first live appearance in Stockholm back in 1981. She still cries a lot, she says, because she is a sensitive girl. But now she exudes a confidence born of renewed success and a knowledge that she is calmly in control of her life.

There were times when she was so confused about her success that she would not venture out without wearing a headscarf to try and conceal her identity. Now she can accept it. "I'm not paranoid about fame", she declares, "although I can understand what that feeling is like." But perhaps the most important development in the blossoming of Kim is that she has learned to be happy being herself.

Two years ago Kim underwent a drastic change of image. Out went the biker jacket and jeans which she had favoured to launch her hits like Kids In America and Chequered Love. Suddenly we saw Kim in high heels and tight rubber dresses to promote her single Second Time.

It simply didn't work and she now says: "I just hope that I've got an individual look. I don't really stand a chance if I go aroudn wearing someone else's ideas. I guess at the time I didn't have much faith in who I was. So when a style came along I jumped into it. In fact it was good that this happened because it gave me the strength to see the good in what I was anyway. It's always better to just be yourself."

To illustrate the point Kim appeared on ITV's hot pop show The Roxy in a red velvet dress that cost her all of £2. She wore it simply because she loves it. "I went to a jumble sale with a girlfriend and I couldn't believe it when I saw it. It looks as if it cost a fortune", she says.

Another example of her new maturity is that Kim is now quite content to live alone in London where she has a music room where she can lose herself with her 12-track portable studio, her drum machine and keyboards. Having co-written eight of the tracks on her album, Another Step, she is anxious to progress as a songwriter.

Today's Kim Wilde is mellower and softer, but still refreshingly honest and down to earth about everything she does. She expects honesty in return and says: "If someone crosses me they're dead! I'm not a vindictive person but I've wasted time before giving people second chances. And nowadays if someone does me wrong, they're out. That's it!"

At the moment Kim can do no wrong. The album Another Step has proved a successful composite of contemporary pop music, with the first side comprising up-tempo rock and dance music, and the second capturing the more mellow side of Kim with some beautiful ballads. It's not just another step up for Kim. She has made giant strides in 1987. 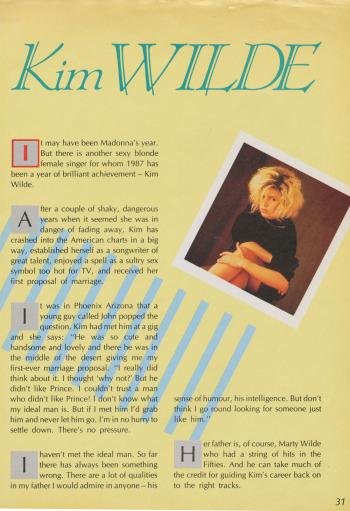 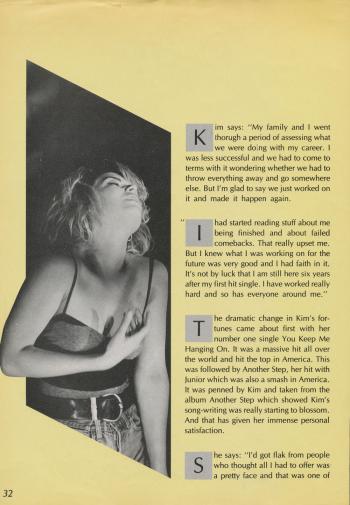 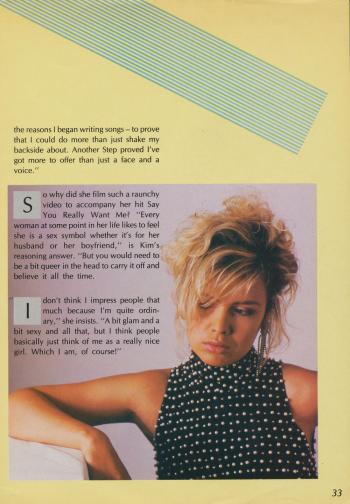 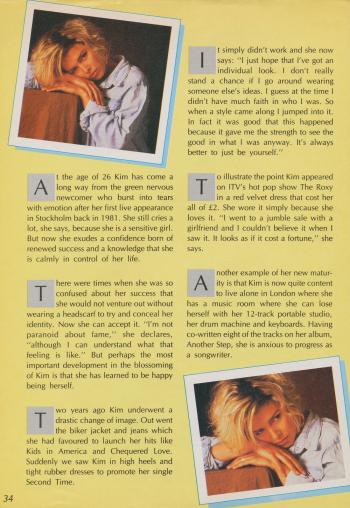 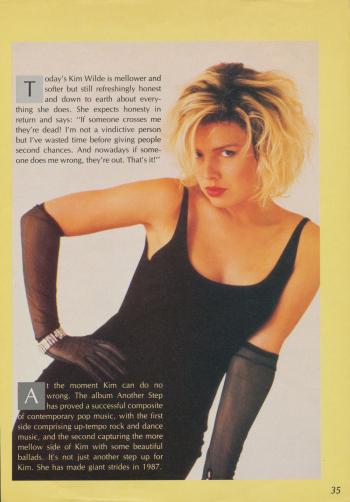