On November 18 1960 Kim Smith, also known as Kim Wilde was born. The daughter of the famous rock star Marty Wilde had to make it, after brother Ricky failed. Kim started as backing vocalist with Ricky. But when Ricky didn't make it, Kim had to sing and the choice fell on her. The first single "Kids in America" was a big success. That also happened with "Chequered Love". After that the biggest hit Kim had in Holland. It reached the second place in the charts: "Cambodia". Then followed "View from a bridge", "Love Blonde", "The Touch" and others.
It was silent for some time around Kim. Recently she was there again, during the big Los Vast Kuipspektakel. Kim sang live, but the music came from a tape. But the tape stalled and it was not a success. After that she released the single "Schoolgirl", but it only reached the tip parade in the Netherlands.
All the singles were produced by Ricky Wilde. Kim has recently started writing lyrics. The result can be heard on Kim's newest LP "Another step". From that LP comes the newest single "You keep me hanging on", an old Supremes-hit. In England that single has already reached no. 2.

Who isn't a fan of Kim Wilde yet can become that now: Official Fan Club for Kim Wilde (address). 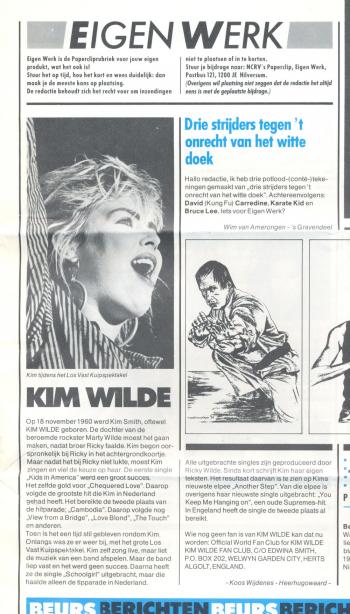