Kim Wilde was born into music. She is the daughter of 1960s rocker Marty Wilde, a contemporary of the Beatles who still happily plays gigs around the clubs, and was brought up very normally with her brother Rick in a country home near Knebworth.
After a year at art school (enrolled as Kim Smith to hide her identity as the daughter of pop star Marty), she discovered that the pull of music was too much to resist and she went to work with legendary pop producer Mickey Most, who then had his own record label called RAK.
Her first single, 'Kids from America', was a big hit as was 'Chequered Love', released in 1981. Later on 'Water on glass', 'Cambodia' and 'View from a bridge' also did well but after 'Child come away' in 1982 the relationship between RAK and Kim seemed to founder and the hits ran out.
She did not fare much better at her new label, MCA, who had her styled and reshaped to conform to their idea of Kim Wilde. She appeared on her publicity material trussed up in shiny black leather.
Her album 'Teases and Dares' flopped. It was time for yet another rethink, and her mother Joyce became her personal manager. As glossy as she looks, Kim is a worker and a fighter, and she took a long time off to write more material, this time on her own as well as with other writers. In her new pictures she looks more natural, the sexy-looking girl next door. Last year she reached the number two spot in Britain with 'You keep me hanging on'. She later won the top spt in America with the same single, making her a doller millionaire in the process.
She came very close again in Britain and America with her next release, 'Say you really want me', which she sang on The Roxy wearing a bright red dress which plunged everywhere except off. 'Being raunchy like that is just a joke and to me a bit of tongue in cheek', she said. 'People who know me well, and there are lots of them, know that I am very normal, but like a good laugh and that is what this is. Even the dress was not really thought out. I bought it for four pounds at a rummage sale and a friend and I shar it to go to parties. At least people cannot complain about my middle-class look as they have done in the past.

'I have always liked coming up to Newcastle for the Tube and I was really keen to do The Roxy as soon as it started. It is always so relaxxed here. I can go to pubs and clubs without being bothered as they are so used to artists. It is a real rest before going to America, where I will be interviewed for TV three or four times a day, posing for pictures, and flying from one town to another. It is quite worth it because having had a number one there means that I am well established and liked. All I need now is a number one hit in Britain. I just missed it by one place with 'Hanging On'. What I have enjoyed most in my career is touring with my own band like I did three years ago. I love live rock music and hope I an tour again very soon.'
Kim Wilde is the only British female solo performer since Sheena Easton (excluding Annie Lennox of the Eurythmics) capable of getting a major hit in America and Japan, where success means literally millions of sales of records.
She is already a major star in europe although the acolade of a British number one still eludes. As well as being one of the real beauties and charmers of the music scene in Britain, she has the looks, stamina and personality as well as the talent to develop and sustain her career as a major international star. 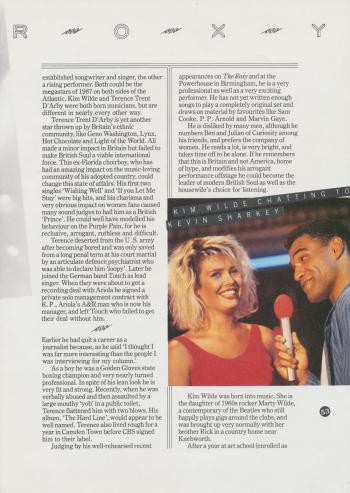 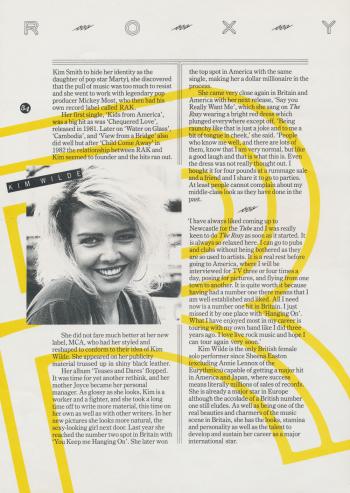