In 1981 when Kim Wilde had a huge hit with Kids in America it was commonly thought that, whilst she certainly was a talented young twenty year old, she would probably fade back into obscurity fairly quickly. Such seems to be the fate of attractive female pop singers. Well, Kim Wilde has yet to become a superstar, but equally she certainly hasn't faded into obscurity either. Her latest single 'You Keep Me Hanging On' is a dance floor and chart hit, whilst the album 'Another Step' is in fact her fifth. Andrew Watt spoke to Kim Wilde, in Australia recently for a promotional visit, about her resiliance, her ambitions and cover versions. Inevitably sex entered into the conversation.

On her fourth album 'Teases and Dares' Kim Wilde began writing her own material, an area of productivity previously almost monopolised by brother Ricki and father Marty. On Another Step Kim collaborates with both Ricky and Marty and with her guitarist Steve Byrd so fulfilling an ambition she has long held.

"Right from the start I really wanted to get involved in writing, and it was only on the Teases and Dares album that I got it together. I found I had a lot more work to do and I'm really happy about it. I think there's a possibility of one of the songs I've written coming out as the next single."

It won't be the current single though, for that is a highly energised dance version of the old Supremes song 'You Keep Me Hanging On', a track which threatens to be the Venus of early 1987. The song was sprung on Kim Wilde as somewhat of a surprise by her brother, and it served to overcome the reservations she may have had about cover versions of "classic" songs. "I was doing some things for the album in L.A. and when I got back he'd already put the backing track down. He didn't tell me what it was and I didn't really recognize it. He gave me a cassette of it and I worked on it for a few days and came up with the way I wanted to sing it. Because it was his idea and because it wasn't a song that I picked out and particularly favoured it worked well because I was completely fresh to it. I didn't have any preconceived ideas about how I should sing it. In fact I hadn't heard Diana Ross' version for years.  My memories of the song were just of the hookline and so I made a point of not listening to any versions of it before I did mine. I felt that was the only way that I would make a valid cover."

At age twenty-six with five albums and a number of hit singles to her credit Kim Wilde has achieved more in the rather vacuous world of pop music than most do in twice the time. In a sense it would be surprising that early success and the attendant lifestyle had left her somewhat jaded. It seems this isn't so.

"Obviously I've done a lot for someone who's just turned twenty-six, but I'm really glad. I always wanted it to be that way. When I was sixteen I think I was ready for it. It took until I was twenty, but I was ready for it a long time before that. For me school was a waste of time, save for friends I made who are invaluable and languages which I really enjoyed. Kids know what they want to do and people should listen to them more and not be so scathing and tell them what they think they should do."

But hasn't your lifestyle stopped you from doing all those normal 20 year old things like parties, holidays and (gasp) boyfriends.
"I've had my fair share of (gasp) boyfriends and more than my fair share of parties and getting out of it. I don't let my career stop me from living. None of y very close friends are in this business. Their lives are a million miles away from mine but I involve them in my life as much as I can and they involve me in theirs. I'm not a paranoid popstar. I don't rush out of my house in case anyone sees me. I don't care too much who has my telephone number. I don't stop myself from going out to a pub or a club or a restaurant. If I really want to be there, I go there."

So Kim, the pop artist, doesn't take herself too seriously. Is this to suggest that she takes her music equally without seriousness? Is pop music simply disposable entertainment or is it something more?

"I think history has proven that it isn't just throwaway entertainment because of the way its lasted and developed and grown. In that way it is as important as any other form of art. It's part of the history of social comment, it pains a picture of an era or an age. Even if the lyrics don't particularly tell you what life was like at that time, you can get a feeling from the attitude of the music or the instruments used. What we've got now, or more so in the early eighties is records that tell the story of how technology came into music. Now you can see that people have become stifled by the synclavier and what have you and are going back to more traditional methods."

Whilst never discovering her obvious feminine attributes Kim Wilde has never sold herself as a singing sex pot. She's certainly no feminist but Sam Fox - she isn't. She prefers to take a long term view and in a sense it's worked. The day Sam fox releases her fifth album I'll walk from here to London to personally congratulate her.

"I don't know what trip those girls are on. It's not that I'm against the whole glamour side of it because I do enjoy that too. That's an attraction to pop music. I'm kind of clever too and I do realise that those things are transient. I also can see it's a very short term attitude and I always intended to stick around a long time. I don't find what Sam does disgusting, it's just that I don't have interests in acting or any career interests outside music." 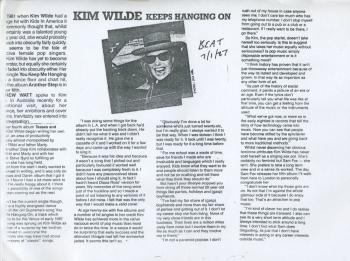