Kim Wilde is someone who doesn't care much what others say about her. At least, that what she says herself. To look whether that is true we tell her what three of her male colleague think about her and let her respond. Do you know whom her favourite man is, by the way...?

We meet Kim Wilde in a dressing room of the Toppop studios. She is dressed in black and wears a Beastie Boys sweatshirt. "I am a fan", she says when we react surprised. "I love bad boys".

Ah, that's just what we wanted to talk about. Some very bad boys have given us their opinion about you. Would you like to respond?
Of course.

Curt Smith, from Tears for Fears, said about you: 'She looks great in her short tight black leather mini-skirt. A bit too tough for me - a hard woman I think.'
Yes, Curt says that because we have never met. He probably only knows me from pictures and on pictures I usually look a bit stern. I can hardly laugh when I'm in front of the camera. But I'm sure that Curt would have a different opinion if he would have met me once.

Paul King says about you: 'She's got a very nice mouth.'
I can be very brief about Paul King: there's nothing I find attractive about him (not even his mouth) and I don't like his music either. But he does look like someone you can have a drink with.

Martin Fry (ABC) says: ' I think she should loosen up'.
Yes, he's right. I think so myself. I am rather restrained and serious. I should be more spontaneous and enjoy things more. But fortunately it gets better more recently.

Who is your favourite bad boy?
I don't have to think about that for very long: Christopher Lambert, Greystoke, the modern Tarzan. Why? That's obvious really. He's really handsome. 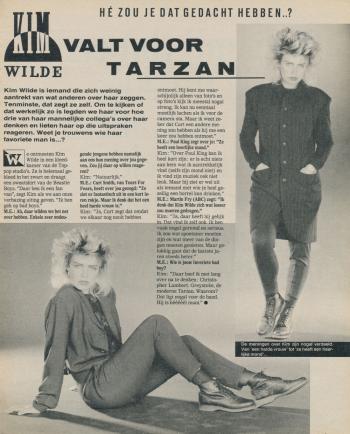