Spiders, chocolate bars, ironing, Roy Hattersley (!?)... Kim Wilde can't stand any of them. "Why ever not?" squawks Richard Lowe...

I don't hate him but he's the person I dislike the most. I aways suspected I didn't like him - probbaly because of the way he looks - but my suspicions were confirmed when I saw him on The Clive James Show with Victoria Wood, who I think is incredibly funny and articulate. Anyway, they were asking him what jobs he'd done and he mentioned something to do with Blood Donor Centres, and the whole audience including Victoria Wood burst out laughing at this. I suppose the joke was that he'd suck the blood out of everyone given the chance. What got me was the way he reprimanded her because she laughed. He said 'you wouldn't be laughing if you were on your death bed and needed blood'. And I just thought 'oh my God, there's nothing worse than a politician without a sense of humour!'. So it's not because he's fat or because he spits when he talks that I dislike him so much, it's just his lack of humour.

Chocolate is one of my pet hates because I love it so much. I've got an incredibly sweet tooth. I have to restrict myself though because it doesn't go too well with weight and everything. And of course it gives you spots. But I do indulge occasionally. I'm not that cruel to myself. I love Toblerone. You can get white Toblerones over in Switzerland and these wonderful chocolate liqueurs. I can't remember what they're called but they're my favourites of all.

I can't stand cardboard meals because they're just so tasteless. Things like burgers are OK I suppose because people only eat those things occasionally. The thing about those packet mixes and Pot Noodles and stuff is that the people who use them tend to use them all the time. In some people's food cupboards you see nothing but all these packets and tins. You just don't need all those chemical additives and preservatives in food. I don't understand why people don't just use fresh herbs - it tastes much nicer. They don't sound like food to me and I'm sure all that must be bad for you. The other thing I really hate is rice pudding. i seem to have some horrible memories of that from school, although school dinners on the whole were alright.

Bills are just such annoying things. What I normally do is let them build up so I have about six to pay at once and it's amazing how long it takes to organise yourself. You have to fill in the form, write the cheque, put it in the envelope (full day's work this eh, viewers?), write the invoice number on the back, find a stamp. I mean, it can take literally about an hour and it's the most boring thing in the world.

This outfit was made for me to wear for the cover of the 'Teases and Dares' LP. It really is hideous - blue crushed velvet with silver paels and strips of blue everywhere. I wanted to change the picture for the LP cover but the record company held me up to ransom and said that the LP would miss the release date if we didn't go with that sleeve. I should have stuck up for myself but I didn't. This outfit was made by a woman who's employed to make clothes for me. Now she does make some really great clothes, clothes that I really enjoy wearing a lot and she's very good, but this particular outfit was one of her less inspired creations and it made me look dreadful. But I do believe I wore it on Wogan, so I suppose at the time I must have liked it. We all make mistakes and do things we regret later on. That's part of growing up in public, which all us pop stars have to do.

I can't stand Blue Nun wine. Even the smell of it makes me feel sick. My mum used to drink a lot of it - well, not a lot, but it's what she used to drink. I've just never liked it. It's sweet and it tastes like it's been made in half a day and fermented in a stainless steel vat. In fact it doesn't taste as if it's got a grape in it at all. I really appreciate good wine. I like to drink wine that's made out of grapes. I mean, that wine tastes like the stuf in those food mixes - full of everything except what it should be. I'm sure I probably had a bad experience with it when I was younger, but that's not the reason I dislike it now. It's probably bad for you as well.

I was always dreadful at Maths. I tried hard and i'm sure I had good teachers but I just didn't have the capacity to do it. I don't operate on that level of logic at all, so really Maths is beyond me. There's this theory that there's a link between being good at Maths and being good at music. They used to say that to me at piano lessons. I was a very good pupil at piano - I got up to Grade 6 and did really well, so I don't hold with that theory at all. I used to feel really ashamed of myself for being so lousy.

When the cartographers modernise the maps, instead of putting T-U-R-K-E-Y they should change it to C-A-R-S-E-Y (she's trying to spell the word 'khazi' which is old army "speak" for a toilet). I went there for a TV special a few months ago, to this place called Cesme, and it was just such a horrible place. It was full of German tourists - not that German tourists are worse than any other tourists - but it was the real bucket and spade brigade down on the beach, hundreds and thousands of people with their kids. It was just so noisy and horrible. It was also the dirtiest and smelliest place I've ever been to, and the food was dreadful - in fac tI had my worst ever meal there too - this big, vile lump of meat. I made some very good friends there but the actual physical place is jus tso awful.

My least favourite record is definitely "Yellow river" by Christie, an absolutely dreadful song that was number one in 1970. When I was younger I used to go on the road with my dad - playing gigs at Working Men's clubs and places like that. Before he went on there would always be a local house band and they seemed to always play the same types of songs and 'Yellow River' was always in the repertoire. And they'd always murder it mercilessly. It's hard to murder a song that's already dead but they managed it somehow.

'Running scared' is this awful film that came out last year and my new single 'Say you really want me' is actually on the soundtrack. You don't actually hear it that much in the film. I think it comes on the radio at one point and you hear a tiny snatch of it. My record company in America asked me to do it, saying it would be a good profile to be in this film. I watched the film subsequently and it's just really boring - trying to be funny when it wasn't. The plot was dull and predictable, the script was awful and I was raher sad that my record was associated with it.

I've never liked spiders. For as long as I can remember I've always been terrified of them. In fact if I saw one now I'd run a mile. When I was little we lived in the country so there were a lot of spiders around all the time. But I never liked killing them - I think that's really cruel. If I found one in my bath would I drown it? I'd be out of the bath like a shot, but I'd help the spider get out of bath too and send it on its way. Spiders just give me the creeps - I think they do most people, don't they? I don't think I'm particularly squeamish. We used to have frogs in our garden when I was young and I used to play with them. I like frogs. 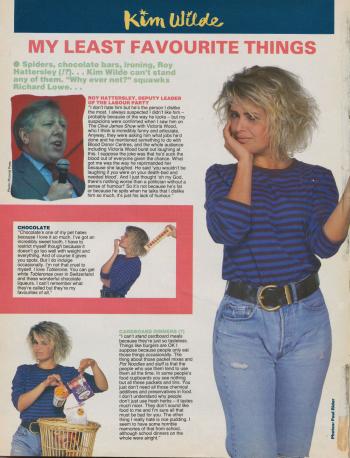 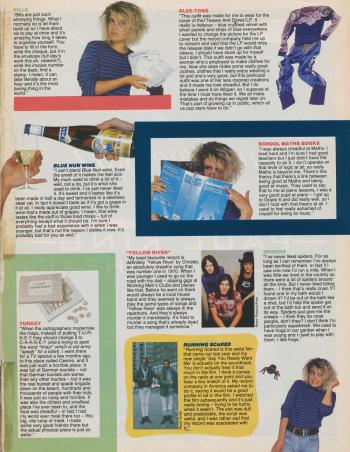