A real star, a woman of the world, a vamp... that's Kim Wilde, right? Not really. Because how surprised we were when Kim started blushing when we asked about her first boyfriend.

First she scores hits like 'Kids in America' and 'Cambodia', and then a long period of silence sets in. But (happily!) Kim Wilde (26) goes on. 'Just keep working at it' is her mantra, and she's right! Because with her single 'You Just Keep Me Hangin' On' she got into the English Top 10 again.
And did you hear her latest LP? Or were you at her concert in Utrecht late last year? You will probably understand why her friends call her 'Your Royal Top Tenness' now. Right now Kim is still touring in Europe and there are even plans to continue on the other side of the ocean. America...
Reasons enough to talk to Kim once again.

First of all, to be ure: is Kim Wilde your real name or not?
Half! In fact my name is Kim Smith. But because my father performed under the name Wilde I felt it was obvious to call myself that as well.

Where do you reside when you're not on tour?
In London. I have a great apartment there, consisting of a living room, a dining room, a bedroom which is my pride and joy. The walls are dark blue with turquoise, the drapes are red flannel and all the cupboards, doors and tables have golden edges. Unfortunately there are only few people with good taste, mostly they call my beautiful gypsy bedroom kitsch. Can you believe that?

Oh, er... Do you live alone there?
I knew you would ask that! Yes, I do live there alone. My best friend Clare comes by to sleep over, but I can't give you any romantic stories.

It's a pity. You have been in love once, or haven't you?
Sure, in kindergarten already. I don't remember the name of that boy, but I do remember that he was more into one Natalie. She was much prettier than I was and I was so jealous! Do you know why I fell for him? He had a watch and he could tell the time. Yes, I've always admired the brains of boys more than their looks.

Do you remember your first kiss?
Sure. I was fourteen years old and totally blown away by a boy from my class: Dave. One time we were in the dico and I suddenly noticed my friend totally tangled up into some guy. I thought I would have to do the same... It was horrible! I closed my eyes, pouted my lips towards Dave and didn't have a clue what I was doing. It turned out alright later, though. I guess I was a late bloomer. Until I was fifteen I was too much into scouting to be involved with going out and doing that kind of thing.
My really wild time came after highschool. I went into art college for a year and that was one of the finest years of my life. We had so much fun we barely got around to painting. although, that's where I coloured my hair for the first time!

Tell me how things are going right now.
Alright, I can say. The tour across Europe seems to become a scucess and I would be very surprised if the plans for America wouldn't go through. Soon there will be a new single as well. I don't know which one yet but it will be a ballad. The only thing that I don't like is that I get photographed so much these days. You wouldn't think so, would you? I really hate it, I can never look relaxed when I pose. I don't recognise myself after that and so I hate the next photoshoot even more... Pity isn't it? 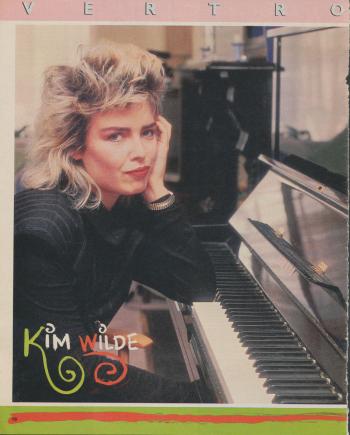 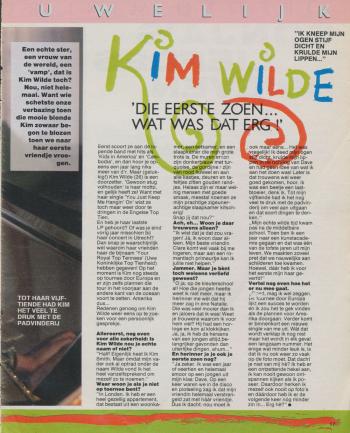