Kim Wilde: the return of the Brigitte Bardot of Rock!

One could believe she'd be sacrificed because of fashions or becoming obsolete by the arrival of new Top Stars. Quite the contrary! Thinner and more beautiful than ever, Kim Wilde made a dazzling return in the charts around the world thanks to 'You keep me hangin' on', a song by the Supremes converted to the style of today.

'Another step', the title of your new album, translates to 'New Step'.
Indeed, while I worked differently on this disc, from concept through completion, until the sleeve. I'm totally involved! I stopped three years before making this album because I had lost all confidence in myself. It was a very difficult time. The success of 'Another Step' I'm totally freed and given back confidence!

You grew up in a family of musicians. Your father, Marty Wilde, was a rock star in the Sixties. When did you decide to follow in his tracks?
My father did not push me at the start. I spent my youth traveling the world with him, I went to school during his more difficult periods. I dreamed of becoming a singer, but for a long time I was torn between two loves: music and painting. At nineteen, I took classes in drawing and sculpture in a school of art. As I could not reconcile the two, I had to choose!

Can you look back on your debut with 'Kids in America'?
My brother had to make the demo of 'Kids in America', and he asked me to sing. He sent the tape to record companies and soon after, I signed my first contract. I was twenty and I was surprised that everything went so fast!

How did you experience success?
I do not think I've changed. It was the people around you who want to make you big-headed! Don't forget it takes a lot of concessions and work to have success!

How have you experienced the arrival of new stars like Madonna?
We're obviously competing, but different! I'm not jealous, I love Madonna ...

For this new album, you did call for new musicians and you're gone to record three titles in LA.
I first turned outwards to meet other musicians. I worked with Richard James Burgess, who has produced records for Fiver Star and The King, Rod Temperton, who co-produced with Quincy Jones the album 'Thriller', then with a German known for his collaboration with Nena, Reinhold Heil. And I really found a great guitarist in the person of Steve Byrn! I felt stronger than before. This does not prevent my being always supported by my family: my father, Martin, and my brother, Ricky, for the production, my mother for the management of the entire enterprise.

But you chose to live alone.
I left home three years ago and settled in London near Regent Park on my own. I love my apartment, I carefully selected each item in the interior!

Have you not been tempted by American life like many rock stars?
No, I would not live in the United States A month in Los Angeles, it was a maximum. Paris is the only city that I'd want to live outside London.

How do you explain your impact with the French public?
Only because I make good records (laughs)! I can not believe that the French are more receptive to my music than others. It is my nature they love!

Yet most of them do not understand your lyrics!
This is not a major problem. I'm a fan of Etienne Daho and Laurent Voulzy, although I do not speak fluent French! Nevertheless, I really want to sing in French. It's a project!

In 'Another Step' you sign your first and you played keyboards on a track.
I play the piano since the age of twelve and I have always written song. Due to lack of time and confidence, I never dared to sing my lyrics. Today I made the leap. So I can get more involved in what I'm doing.

Is not it a little frustrating to come back strong with a cover?
No, because it's the only one on my album. It was an idea from my brother. We've always loved the Supremes. Thanks to the new studio technology, it is posible to give a punch to old song again! It is also a tribute.

Since you were finally recognized in your country of origin, it probably touched you.
I am very pleased with this success throughout Europe, especially the number 1 hit in the Top 10 in Britain! I feel like my career is starting all over again, it's fantastic!

For five years, have you not sacrifice your privacy for the benefit of your career?
Yes, but when I'm in love, I just feel an energy that would be necessary in my work. I am currently too selfish to share my life with someone. My career is paramount. Most of all, I have not yet found the man of my life!

How do you maintain your physique?
I am a bit lazy. I force myself to go swimming! I do not diet but I do not smoke.

You are the object of many fantasies ...
They wanted me to stick to a little picture of a 'Glamour Girl'. Just because I sang 'Love blonde' I don't need to stick with the image of the traditional sexy blonde!

You are very often dressed in black.
I do not want to waste time and look for clothes. I dress in black to avoid the headache of matching the right colors!

Your plans?
Lots of television appearances and the preparation of a new disc, for which I intend to write more lyrics!

Fulfilled?
Yes, most of all I want to stay on top. I know the price of success! 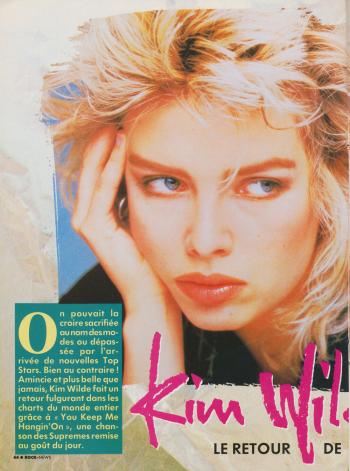 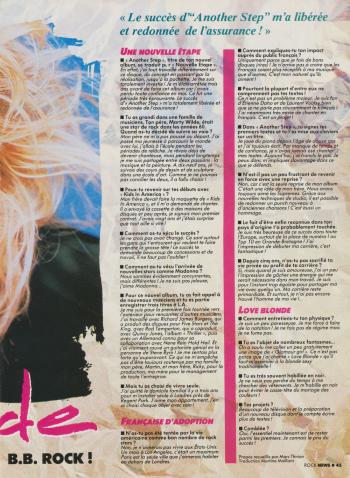