She dances lusciously in a bodytight black dress, pulls her pearl necklace across her lips, shortly after that she cavorts with four half naked muscled men on a bed - and only dressed in a satin nightdress she sings the part: "I want you tonight".
No wonder, that Kim Wilde (26) created some controversy in England with her video to her new single "Say you really want me". In England she was banned from many TV shows. Mostly the four men created a stir. Kim Wilde went further than George Michael in his video to "I want your sex", and advertised group sex it was said in England. Kim Wilde: "the sexy scenes are meant ironically, it's all just good fun."
Despite this she is working hard on her new single, to be released in four weeks from now already... 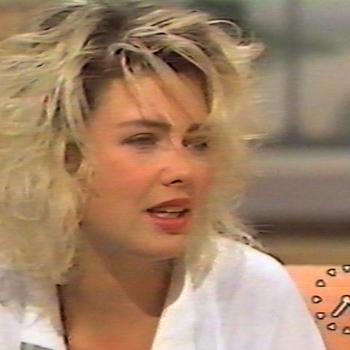