The Wilde family have got it taped, so to speak, and it's impossible to look at Kim's offerings without noticing what the others contribute.

Blonde, bouncy Kim does the singing while dad, the old rock and roller Marty, and brother Ricki join in with the writing and production.

It's a good mix, reflected in Kim's Another Step album. Ricki dictates an awful lot - he produces or co-produces 10 of the dozen tracks and has a hand in writing five of them. He also plays Fairlight and synthesiser and chips in with occasional backing vocals.

Right, back to Kim. The most immediately noticeable song is the old Supremes' "You Keep Me Hanging On", a hit again this time. Nothing is likely to surpass the original, so rather than compare, just say it's pretty good on its own standing, despite the drum-machine, syncopated start.

The Wildes have come up with a good variation here - from very danceable pop to the rock-tinged "Another Step (Closer To You)", "The Thrill of It" and "I've Got So Much Love" to the slower "She Hasn't Got Time For You". Production is slick - maybe too much so - perhaps justified by the fact that Kim's voice has that wavering, quivering feel to it and needs the support.

Coincidentally, one of the best tracks is "Brothers", written by Ricki and Marty; a dirfting, lazy song that produces some excellent singing from Kim. 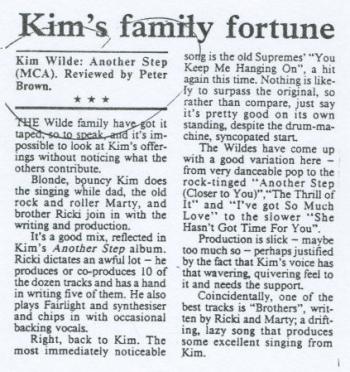