Full name: Kim Smith
Born: November 18 1960 in Chiswick, London
Height: 5 ft 6 ins
Weight: "I haven't been on the scales recently but I'm under 8 stone."
Previous jobs: A Saturday job distributing carnations in a greenhouse, a cleaner for her piano teacher, a sales assistant in Harrods, a cleaner in a hospital.
Likes: Black clothes, and Christopher Lambert
Dislikes: spiders, chocolate and make-up artists
First record bought: Gary Glitter's Greatest Hits
Family: Her dad's famous '50s singer, Marty Wilde; her mum, Joyce, used to be a singer, her brother, Ricky, is 26 and manages her with Mr and Mrs Wilde. Kim has a younger sister, Roxanne, who's six and a little brother, Marty Jnr, who's five.
Current single: Say you really want me

"The first boy I ever had a crush on preferred a girl called Natalie."
The young chappie who first broke Kim's heart hardly even noticed her. "His name is always on the tip ot my tongue, but I can't remember it," says Kim. "All I can remember about him was that he didn't like me that much. He preterred a girl called Natalie, who was ever so pretty. I didn't like her, but I liked him because he could tell the time and I thought that was tremendous." So, does she remember her first kiss? "Yes, I do. It was with this boy called Dave. I was at this disco and my friend was having a good old snog with her boytriend. I thought: Oooh! That's a bit grown up! Then she suggested I try it and I did." And the verdict? "It was terrible. 1'11 never forget it. I shut my eyes, pursed my lips and didn't have a clue what I was doing."

"I was a patrol leader in the girl guides."
Although Kim promised to do her duty, etc etc, her enthusiasm at school didn't match her love of the Guides. In fact, she didn't enjoy school at all. Kim remembers: "1 mucked about quite a bit and I wasn't academic at all. 1 would have done better if I'd gone to a school that encouraged artistic tendencies - mine positively discouraged anything creative. They should have encouraged me with my drawing and painting - things I could do."

"I don't find my weight a problem any more."
Kim admits that she's outgrown the time when food used to be a problem, but quite how she keeps so slim seems to evade her. "I don't do any exercise at all and I don't smoke. I usually end up eating snacks all day. I like going out to eat with friends but I never have extraordinary amounts of food," she says.
Although she's rather partial to bagels filled with smoked salmon and cream cheese, she's also aware of what's good for her and what's not. "I always buy skimmed milk and I've given up sugar in tea. Also, I try to eat wholemeal bread because it's got fibre in it and it's good for you." One food she does try to avoid. though, is chocolate. "It's one of my pet hates because I love it so much," she admits. But if you were to raid Ms Wilde's fridge, you'd definitely go hungry. The only thing that keeps the shelves company is a bottie of Evian water.

"My personal stereo's as important to me as toilet paper."
Kim says that her personal stereo is one of life's essentials: "It's as important to me as toilet paper. My handbag's always full of cassettes, which I play while I'm travelling around. I'd really like to get one of those solar type ones so I could use it when I'm sunbathing." Another favourite possession is a watch she bought in Carnaby Street, and she has two special pairs of earrings. "I bought them while l was on my travels in LA. They're original '50s ones and they don't make earrings like that any more, so they're very special. I'm not into real jewellery but l do like some silver and l love pearls and diamant鮠Perhaps I'll get into gold when I'm older."

"My bedroom's decorated in very deep and passionate colours."
Kim lives on her own in a two-bedroomed flat in North London. "There's a large living room and dining room and a bedroom which, in my mother's words, 'Looks like a brothel.' The walls are deep blue and turquoise and there's red velvet curtains and gold sprayed round the picture rails and on the doors and the dressing tables - very deep and passionate colours." To help keep her flat spick and span, Kim employs a cleaning lady once a week to come in and give it the "shake and vac" treatment and such like.
"If I didn't, the place could be a tip," she admits. Kim's very safety-conscious, mainly because she lives alone. "I've got a personal alarm system in my home. Luckily, I've got lots of neighbours because I live in a block of flats. I did consider living in a house because I make a lot of noise, but then 1 realised that I wouldn't actually feel very safe in a place where I could scream out for help and feel certain someone would hear me."

"I'm really very lazy about clothes."
"Clothes don't really hold that much interest for me." admits Kim. "I'm really very lazy about them. I'm very aware of what clothes to buy for me but, from an image point of view, I run a million miles from it." Her favourite dress is om she picked up while she was doing a photo session in Houston, America. It's black with diamant렡nd pearls all over it. For album cover and such like, Kim has employed a designer to make all her clothes. When she's lounging about she likes to wear old jeans and shirts.

"I like talking about sex, especially with men."
"Men," says Kim, "don't talk about sex much between themselves so I do like talking about sex with them. I find it very entertaining." As far as relationships are concerned, Kim admits that she's very selective. "I've always been choosy. I know lots of people who aren't, but when I give myself, I want it to be something really special. I haven't met the ideal man yet. So far, there's always been something wrong."
In the looks department, she finds the likes of Tom Cruise and Matt Dillon very attractive. "I think I could be into them for a bit of leering," she laughs. 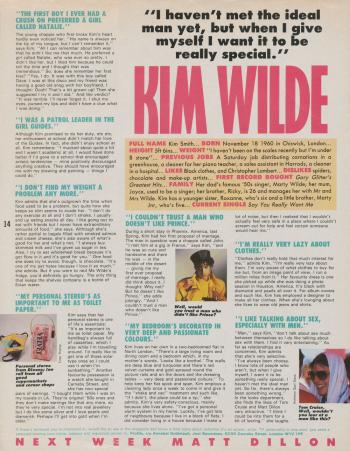 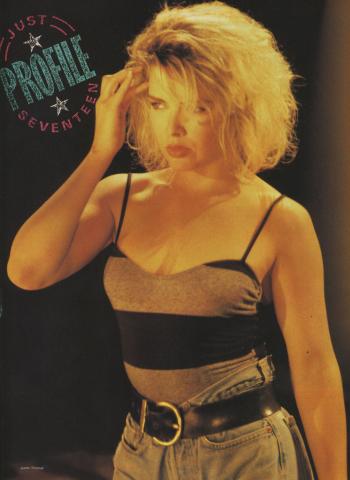