Kim Wilde kicked into the headlines with a bit of pop music history when her cover of 'You Keep Me Hanging On' entered the Top 10 for a record breaking third time. But Marty Wilde's prettiest kid swears she wasn't aware of any of this when she cut the track.
"I really wasn't aware that the song had gone Top 10 even once. It's a favorite of my brother Ricki and it was his idea that I record it. It wasn't even intended to be the first single, it just turned out that way because we were all very happy with the sound of it."
While Wilde is just another singing pout on the North American landscape, in Europe she's a big star with tw osingles in the Top 10 and the unvarying attention of the pop press, whose tattlings she's quick to dispel.
"I most certainly do not get smashed in public and thrown out of clubs. I'm a lady. I get smashed in the confines of my own four walls. I kind of resent being lumped in with the Samantha Foxes as being some sort of new, one-shot thing."
"I've been recording for six years, so I'm not exactly new. But even in Britain, there's this emphasis on my visual side. I'm working away on being known as a songwriter who just happens to look a certain way as opposed to this goodlooking woman who happens to write songs." 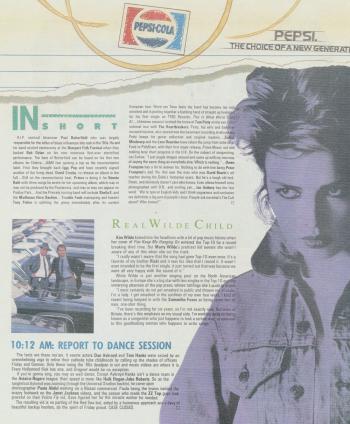