Kim Wilde is one of those rare phenomena in the world of pop: a successful writer/performer unaffected and unspoilt by the fortune which has come her way.

Anyway, that's the way she struck me when I met her last month while she was here on a brief promotional tour and so I am delighted for her that 'You keep me hangin' on', the single from her new album 'Another Step' (MCA 3579-1, through WEA), is doing so well (it has made No. 1 on 3XY's Hot Hits as well as EON's Top 40). Apart from the obvious difference (synthesizers) it sticks pretty closely to the original Supremes version and that was a good move.

Unfortunately, not much else on Side One (the uptempo side) compares with it, apart from the very bouncy 'Hit Him', which should do well on the dance floors. For much of the rest the tracks seem to run into one another and end up quite undistinguishable.

But Side Two is a different matter, that's the side on which everything slows down and Wilde shows her mellower - and much more appealing - side. The stand-out track is Don't Say Nothing's Changed, the only track she wrote by herself (most of the other tracks are co-written with brother Ricki, father Marty or both). It has a lovely melody, good words, the gentle ballad arrangement is tinged with jazz and other influences, and Wilde's voice is at its purring best.

'How do you want my love' is almost as attractive, as is 'She hasn't got time for you' with its lush synthesised string arrangement and sax bridge, and mention also must be made of 'Say you really want me', which was produced - and it shows - by Rod Temperton, the man who co-produced Michael Jackson's Thriller and has co-writer Danny Sembello performing creditable things on his keyboards.

I guess that's the good thing about Another Step: if you don't like one side, you're sure to like the other. 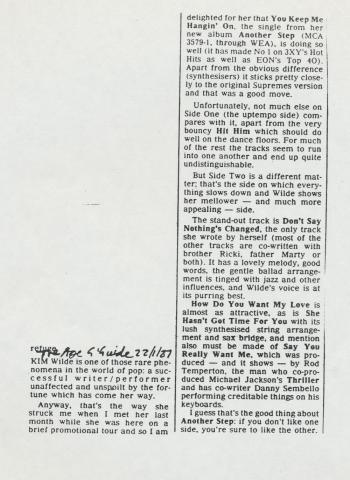