Kim Wilde is not fat, as so many believe, she simply has no fewer than 14 British "hot" singles and five albums tucked under her belt. Furthermore, the only chips she considers are those almighty lintels decorating her shoulders. This is Designer Mistrust, reserved for a media she insists ignored her early work through some abnormal interest in her father and brother, when we plainly couldn't give a flying fart about either!
Her singles are a different matter entirely. The Earth regularly quakes. Despite a small voice and very limited range, making her hopelessly unconvincing when approaching anything remotely resembling balladeering territory, she manufactures all the right moves. Locked in that girlish dreamland where no sensations other than bemusement and indignation are on offer, it is the very backbone of cold, bleached pop.
A fourth British "hot" single awaits, in the skulking shape of "I've got so much", with its pustular riffling. The future is blackless. Smelly but intriguing, "Missing" manages some dismembered desolation; a brave entity let down savagely by a lacklustre lyric. An illustration of loneliness in a suffocating city surely requires more than "it's cold in the street, there's a cold up her nose!"
Kim Wilde has GROWN UP. Apparently. She sells sexual imagery openly and calls it Adult. Well, a few years ago the whole world did want to get into bed with Kim Wilde and now it just wants her autograph.

I guess you'd call that progress. Of sorts. 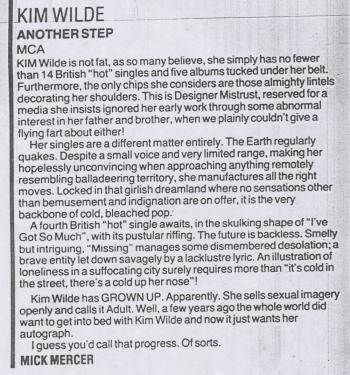