HOLLYWOOD - "Sex symbols can't sing, you know that", said sex symbol Kim Wilde, an English singer who has a Top 5 single with her remake of the Supremes' You Keep Me Hangin' On.

"But I'm different", Wilde said during an interview here. "I'm not a great singer. I'm not like Aretha Franklin or somebody like that, but I do have a distinctive style, I can sing."

Has Wilde ever taken singing lessons?
"No, though a lot of people have suggested that I take them", she said.

Wilde, 26, has been trying to establish credibility as a singer ever since her first single, Kids in America, was an international hit in 1982.

"The press spotted me right away as the sexy type", she said. "I had the blonde hair, the big lips, a decent body. That's all some of them - the male journalists - saw. They look at me one-dimensionally.... I haven't cultivated this sex-symbol thing. I don't hang out in clubs or date handsome men. There's no hot gossip about me. But I still can't escape (that image)."

Wilde once did seem like a candidate for instant oblivion. But she fooled everyone, making five albums and blossoming into a star in the United Kingdom and Europe. Her voice is better, too.

You Keep Me Hangin' On, her biggest American single, is from her MCA album Another Step. This is the third Top 10 hit version of the song. The Supremes had the first one in 1966, followed two years later by Vanilla Fudge's psychedelic rendition.

Wilde said that she avoided listening to the other hit versions before recording hers. The remake was fashioned by her younger brother, Ricki, who has written a lot of her music in collaboration with their father, Marty, who was one of Britain's small crop of '50s rock singers.

The only thing she does not like about her version is that it is a dance single. She is ambivalent about her success in this genre, where singers are often just background figures.

Wilde's record company has other ideas. Its aim is to build her popularity by capitalizing on her fame in dance circles. Her choice for her next single was the album's title song, Another Step, which is not a dance tune. But the company has the final word, and has selected the dance-oriented Say You Really Want Me.

Wilde's blunt assessment: "I think it's a mistake".

She also wants no part of trying to establish a higher profile in the dance-music world with promotional appearances in clubs.

"This dance thing is a dead-end street", she said. "I refuse to get caught at the end of it with nowhere else to go. It would be stupid to do that and I'm not stupid." 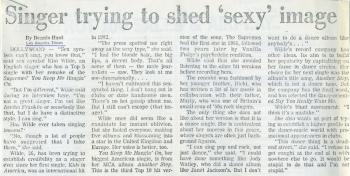