The Slightest Touch - 5 Star
This is the sixth single from 'Silk And Steel' and it sounds exactly like a sixth single! I think the other tracks are fab but this one's a bit week isn't it?
I don't think 5 Star needed another single release to keep their momentum going so this is just their record company being greedy. I can't remember the last time anyone released six singles from one album!

Following - The Bangles
Bit short for a single, innit? I think this is beautiful. Which one is it singing - is it the red one? It is.
Wht a brave single for them to put out but it's also a wise move because it shows them in a totally different light (Sounds like a good name for an album - Ed.) It's also exactly the right time for them to have a go at slowing things down. Radio One are bound to get their hands on this and play it all the way into the charts.

Meet el Presidente - Duran Duran
This one's a lot better than 'Skin Trade'. Old Nile Rodgers has got his hand in there again so it was always going to be a good one but it sounds a bit like he's made a lot out of not very much really.
It's definitely good in a dance sense (having just put it to the test with a three minute office boogie) but there's something about it that doesn't quite convince me. How high did 'Skin Trade' get? 22? Oh - It's gonna do better than that.
They're on a dip in their career and I know what it's like. They just have to keep at it like I did.

Kiss away the pain - Patti La belle
Just recently her records have moved me very little. Haven't moved me at all in fact. I'm just not convinced by her voice any more - even on that duet with Michael McDonald which she did recently! I can remember switching on 'Sunday Night At The Palladium' recently and not recognising her. It just looked like she was trying to show off her technical expertise and forsaken all the soul and anything she had inside.
It's probably America that's done it to her. Everyone's used to being knocked in this country but over there they just heap you with praise like the lash maple syrup on pancakes. It's even happened to me! She's obviously started to believe it all and I think that shows.

Why can't I be you - The Cure
On the first listen this is just a barrage of noise ad tempo that sounds the same all the way through.
It's got a similar beat to Katrina And The Waves' 'Walking On Sunshine' except it's not half as much fun to listen to and is a bit of an assault on the ears. But that's what the Cure like to do to their fans, isn't it. I think Robert Smith shrivels at the thought of anyone actually liking his music. That's probably not true, but that's the way he comes across.

Curiosity - The Jets
I really loved 'Crush on you' which I first heard ages ago and this one's great as well though it's not quite so immediate and commercial.
It's got a great groove to it and really works in its own unpretentious vein. People love playing them off with 5 Star but I think their sounds are sufficiently different for there to be room for both of them. Love it!

Move over darlin' - Doris Day
Doris day's an actress I acually rather like a lot. You remember that film with Frank Sinatra where he tries to kill himself in a car and then... (Yes, yes - Ed.)
So I like Doris but I don't know what the record company's doing putting this out 'cos it's so dated. And the picture of her on the front looks more like Paula Yates. What a great song this would be for her to cover!

Echo beach - Toyah
I really didn't like that! The original Martha And The Muffins version was great - I can remember listening to it at college at the time before I became a pop star!
I don't know why she decided to cover this. She needs some good new material. That's for sure.

Nothing's gonna stop us now - Starship
Urrrrhhhh! Take it off!! I'm eating a sandwich so I'd rather be safe than sorry.

Ba-Na-Na-Bam-Boo - Westworld
They're a sort of Gary Glitter of the late 80s who make really good rock 'n' roll with exactly the right attitude and rawness to it.
I haven't actually seen a picture of her but I've been told she's quite pretty which helps to sell a few records I suppose, and her voice is really good for this sort of stuff which is much more important.
I bought their last single and I'd buy this. OK if I nick it, though? And can I have the Bangles one as wel? Please?

Midnight smoke - Julian Lennon
This one's beautiful. What a singer! It's written by Mike Batt who was the bloke behind the Wombles? He deserves to get a lot of flak about that but this proves he's a very talented guy.
Not quite sure yet what midnight smoke actually is but this is a beautiful song all the same. I can keep that one as well? Thanks guv!

I know - Paul King
This can't fail to sound good because it was written by Dan Hartman and Charlie Midnight who've been working with James Brown recently. But I've never really liked his voice much.
When King came about I found that whole 'me and my band and we all wear Doc Martens' syndrome very, very unconvincing. And this just goes to prove how right I was because he's lobbed his band, cut off his hair, got rid of his DMs and is working with Dan Hartman!
King was always just Paul King anyway. Why he bothered wasting all that energy persuading us there were all of these other blokes as well I just don't know. Going solo was far more honest. But I stil don't like that warbling in his voice!

Never say never - Denice Williams
She's been away a long time hasn't she? This is pretty good and her voice is certainly up there but I don't think this is going to be a smash. Still worth a listen.

Our love - Michael McDonald
I've got all his albums because he writes beautiful songs and this is no exception. Some people reckon he's a bit naff but to me he's inspired.
It might be middle-of-the-road but it's also tender and sincere. I'm always sticking his stuff on late and wallowing in completely romantic dreams. Do I fancy him? No - not really my cup of tea. Bet that beard prickles.

Fire girl - Iggy Pop
I really like 'Cry for love' and 'Real wild child' but this doesn't sound like a single at all. I am thrilled that he's around again and having some hits after all this time but this doesn't appeal to me on any level - except as an album track.

Out of hand - The Mighty Lemon Drops
I love the 60s Phil Spectorish production on this. The song's not bad - but it doens't move mountains or anything.
This si the first thing I've heard from them and on the strength of the production I wouldn't mind listening to some more.

To be with you again - Level 42
I'm a big fan of Level 42 so I'm biased because I'm bound to like anything they put out. I don't think this is a particularly strong song but I've never thought of them as a singles band.
I haven't listened to their album properly yet but there's a really beautiful love ballad similar to 'Leaving Me Now' which is what triggered a lot of people into rushing out and buying 'World Machine'. So that might have been a better choice.
Some people say the're a bit formularised but I'd rather call them a band who go into a studio and do things together (?!!). Well, what do you expect? You're looking at a hard-core fan here! 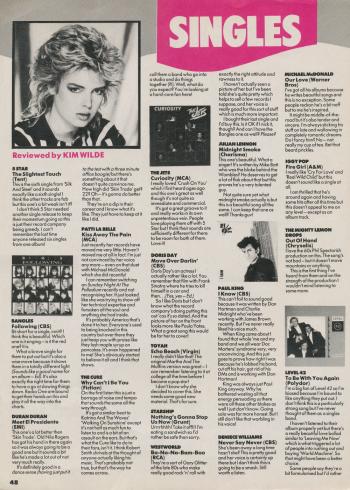