Once the sweet girl of pop KIM WILDE has now turned into a would-be sex siren. ANN SCANLON talks to her about the pressures, pain and pleasure of her new image and commercial success. Pin-up by PETER ANDERSON

Blessed with blonde hair, blue eyes, big lips and a famous father, Kim Wilde's pop credentials couldn't have been better when she burst into public view in the spring of '81.
Radio One adored her, the tabloids followed and a hat-trick of hits ensued. By the end of the year, Kim Wilde was the damp dream of every honest, industrious, red-blooded male in the land.
Marty Wilde's daughter was a 'natural' and consequently cared little for the finer details of image. Her clothes were an unstartling mixture of jeans, T-shirts and basement-bin bargains; her hair a careless mane which she cropped herself and re-bleached (when she remembered) with two quid's worth of Boots' best.
Six years and 14 singles later, Kim Wilde is airbrushed and hairsprayed into shape by Michi and Yoshi - a couple of stylists who she met on a recent video shoot and who are now of invaluable assistance. And, although she still favours jumble sale chic, her £1 outfits are now worn with considerably different effect.
Today, it's a toss-up between a simple, black and white cotton dress and a tiny red velvet number, which clings and plunges in all the right places and has been record company recommended for "sexy" photo sessions.
Photographer and artiste quickly decide on the former.

After a couple of years in the hit-hungry wilderness, Kim Wilde shot back with the Holland/Dozier/Holland classic 'You Keep Me Hanging On', followed it with the self-penned 'Another Step', but recently feil wide of the mark with 'Say you Really Want Me'.
The only remarkable thing about the latter - which had previously been included on the soundtrack for the duff movie Running Scared - was the accompanying video. 'Say you Really Want Me' was a soft focus sizzler featuring four barely-clad Ben Volperrier lookalikes, the Wilde one, a pearl necklace and a stream of less than subtie innuendoes.
Not surprisingly, 'Say you Really Want Me' was deemed unsuitable for teenies. But, although Kim had warned MCA that the single was not Top Ten material she still insists that the banned video was "a lot of fun...
"I sat and talked to the director before we made it," she says, "and I said that I wanted to make something quite steamy, quite sensual and quite funny as weil. I can't really take myself too seriously as a sex symbol cos I know that sex isn't just what you look like, it's about something a bit more invisible.
"So when I'm walking down the street and the guys on the building sites go, Whoa, Kim! and all that stuff, it's very nice, but who could take it seriously?"
MCA are currently taking it very seriously indeed. As firm believers in the notion of Wilde As Sex Symbol they have re-packaged her 'Another Step' LP (originally released at the same time as 'You Keep Me Hanging On') in a series of black 'n' pearl close-ups from 'Say you Really Want Me'. More recently still, Kim appeared on the TV tribute to Elvis, writhing around a double bed in half a leather dress and begging for 'One Night With You'. Right now, Kim Wilde is Britain's brightest Madonna hope by a number of miles.

Born a Scorpio in the Year Of The Rat, 1960, Kim Smith grew up in a showbiz family with a love of singing and dancing and a dream of joining Pan's People.
"During my really formative years, I remember my dad doing pantomimes at places like Blackpool, Swansea and Yarmouth, and I'd hang out in the theatre and learn all the lines. But he was also a singer and a writer and that had a profound influence on what I wanted to do."
On leaving school, she spent a year at art college and it was there - as "a huge fan" of Debbie Harry - that she decided to go blonde. "1 was talking to someone the other day, about having blonde hair and why I chose to go blonde. And, obviously, being a rounded sort of person with big lips and everything, dying my hair blonde was a disaster as far as people taking me seriously was concerned, or even just recognising me as an intelligent being.
"People in general have really preconceived ideas - not just about women with blonde hair, who have large lips and look pretty and are famous - but about race, religion, vegetarians, people who screw around, everything.
"So I decided - not consciously - to put myself into an obvious bag just so that it was somewhere I could develop from. It's kind of a camouflage to sell - I know sex sells and I know blonde hair sells; so you know that you're on to a winner. In a way, it's quite calculated but I also think it suits me."
This said, the idea of being a blonde, pouting sex kitten is not something that Wilde is always happy with. Particularly in front of the camera.
"To me there's a big difference between an ordinary camera and a movie camera. You can have an affair with a movie camera but not with every photographer who takes your picture - which is why I don't think I photograph very weil.
"I had to do some photographs for David Bailey a few months ago and it was just dreadful. He's obviously used to working with really professional models who jump in the air with their mouths open and he was going. Come on. Kim, give it a bit of sass.
"So I was doing my very best, when he came up and said, How old are you? I told him 26 and he said. Weil, you know what I'm talking about then. and I just thought, F*** off you chauvinistic pig.
"And last week I was doing a photo session and was instructed, by the photographer, that these were to be sexy photos for Japan and I knew that that was pretty much the way the record company saw it too. Now I've been called sexy all my career even though I haven't tried to do all that, but as soon as someone asks me to do it I get offended and I just froze and had to stop the photo-session."
Unlike her fellow blondes who seem to be either in control (Madonna and Harry) or happy to be controlled Samantha Fox), Kim Wilde falls into an awkward no man's land, somewhere between the two. Hence, her performances swing from the near-conviction of 'Say you Really Want Me' to the self-conscious embarrassment of 'One Night With You'.
"Making videos aren't a problem for me," she insists, "otherwise I couldn't have writhed around on a bed with four guys, having fun and being totally natural. But I don't think I really cut it in photographs.
"Not like Madonna, for instance, she looks fabulous and really feels good about the camera, but I feel at odds with it and at home with it at the same time: sometimes it's friendly and something I can have fun with but other times it isolates me and acts as a barrier between me and the world.
"Sometimes I actually wonder if I've chosen the right thing to do", she pauses. "But I'm much better in spontaneous situations, which is why I don't think I've ever come across as a strong media personality. My strength is definitely inside me." 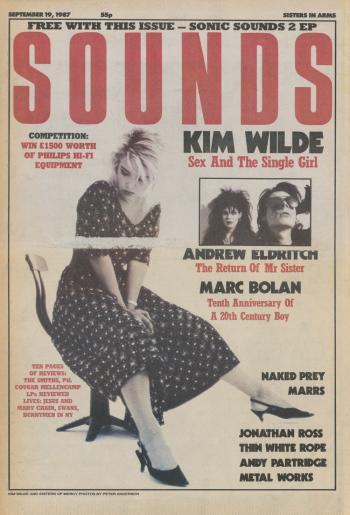 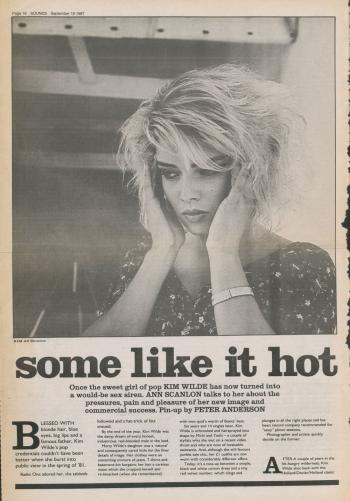 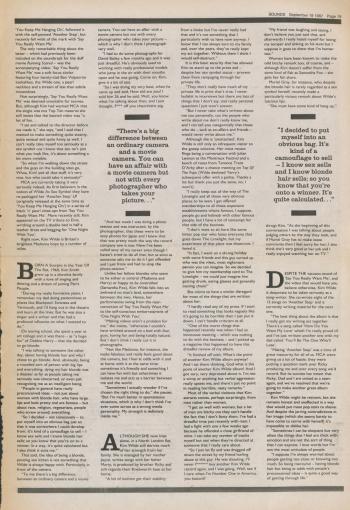