The next step for Kim Wilde

Just because she has blonde hair, saucer-shaped eyes, a slender figure and an enchanting voice, Kim Wilde often finds herself compared with such contemporaries as Madonna, Samantha Fox and Debbie Harry.

Dare it be said, Kim is vastly different from her femal modernist peers.A woman who strongly dislikes the concept of deliberate image-making in the music industry, and to whom comparisons are not a welcome topic. Kim Wilde finds contentment in simply being herself.

"I don't really have a definate image. I've hardly spent five minutes on it", she said in Australia recently. "I don't care about image. I think it is contrived and shallow."

However, if one were to make the comparison: Madonna has made millions not only because of her music and voice, but also because of her multi-faceted image. But, Kim said: "I would like people to see me as an individual, not compare me with other people. People do respect the fact that I have been in music for over five years now and that I know what I am about. But inevitably they ask how do I scratch up against Madonna and Cyndi Lauper and even Samantha Fox, simply because I am blonde and I sing."

As far as the 25-year-old singer is concerned, images, video and charisma are poor runners-up to good music and artistry.

Kim is a tough hybrid of the 80s music scene - a curious mix of poppy commercialism, serious attitudes and talent. She has hankere after a music career since she was 16, acquired it when she was 20 and blossomed within it rather quickly with five successful albums. She has just released a selection of the best of the material she has written in the past year which, she says, is stronger than the songs she has released in the past. "We were very well prepared for this album (Another Step) and I have been working very hard at it", she said. "We managed to choose the 12 strongest works because there was an excess of material. I am not just a pretty face."

Her deeply-expressed feminism is truly individual, and flows forth in the manner and content of her singing. Her cover of the old Supremes' hit You Keep Me Hangin' On has even been adapted to allow Kim to sing what she felt.

To the faithless and constricting male egotist lover portrayed in the song, Kim ends up belting out "Get out of my life!" in marked contrast to Di Ross' eventual forgiveness in the original version. "My version makes it clear that there's no way he's going to get another look into my personal life", she said. "I think it's tougher, and more reflective of the way people have relationships in the 1980s."

The little girl making a token stand against the male supremo in the 60s era was no longer applicable, she said, and was out of date with the ingrained strength of womanhood today. Kim writes most of her songs and has a substantial involvement in the way her records finally emerge. It's a direction she wants to pursue, ahead of anything else.

"Yes, I am serious about my music and the way it sounds. I am more confident and happier than I have ever been", she said. "I want to try out different types of music because within pop and rock there is a whole variety of things you can do. I really love to be in front of an audience and have that communication with them. I want to do more concerts. I like to have their feedback. I was a real performer at school and loved it, so I'll always have that. But I find a lot of videos boring and repetitive and I am not interested in that area at all." 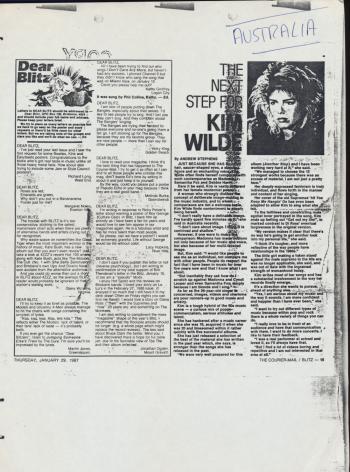