The nights with Kim Wilde

It's under the sun of Guyana where the programme is recorded. Who are the lucky ones to be in the programme? Axel Bauer, Gérard Blanchard, Diane Dufresne, C|arlos Ottomayor, Goût de Luxe, Charlotte Gainsbourg, Les Mécènes, the Blue Birds and Black out. But the real star is the blonde and photogenic Kim Wilde. (Laurent Voulzy will be watching!)

It's 1981 when the career of Kim Wilde starts with the success of Kids in America. The disc has sold over 2 million copies and confirmed the value of this singer who was only 20 years. She followed up with 4 albums and a dozen 45s until Another Step (MCA. 254.347, Distr WEA) The significant change is that she wrote 8 of the 12 songs. She explains: "The beginning of my career was mainly based on the image I gave but I always wanted to be a musician before anything else. I really love music and when it feels it is only one thing to write, compose...

Kim Wilde is the second generation of a family in rock. Marty Wilde, her father, is one of the most famous pioneers of rock'n'roll.
He managed to establish himself as interpreter, too, but also as a composer and manager of artists such as Lulu (who won the Eurovision Song Contest in 1969 with Boom bang-a-bang) and Status Quo. But the whole family is musician. The younger brother Kim (one year younger than she), Ricki co-wrote a lot of songs for his sister. (He wrote 'Kids in America', the nice song that describes those lucky kids in America.) Marty has also written and co-produced for example Cambodia in 1982. "M" (the name Kim is using to describe her father) also co-wrote several songs on the new album 'Another Step'.

It's mainly the cover of the Supremes song 'You keep me hangin' on' that gave Kim Wilde her success in 1987.
"I am superstitious", she said, "I made a point of not listening to other versions of the song when Ricki suggested I record it. My approach was therefore fresh. My remembrance of the original song was that the girl would forgive the faults of her little man. But in my version, forgiveness does not come into it. And I believe that this attitude reflects better relations between boys and girls in the Eighties. We are much tougher!

Anyway, 'You keep me hangin' on' climbed to 2nd place in Britain and went Top 10 and in Australia and Norway. It is also climbing the American charts. Still on the A side of the album, there is 'Hit Him' with super brass and Ricki on synths and most of all: "Another Step", the duet between Kim and Junior Giscombe. That is to say Junior! (There is a maxi version of 5'55" [258397]) This is an energetic rock song combined with warm words and simply tells how a relationship grows between two people who love one another. An eternal love story, what! "Take a step nearer, come over here! Together we can make it tonight!" But the favourite song for Kim is the song is that she wrote with her brother and father: "I've got so much love".

Even if the songs of love are eternal and are in the charts, don't forget Kim Wilde is more than just an image. When she went on the stage of Zenith Paris, as always impeccably clothed in black, we were well realized that it was the end of the fantasy era (sorry, Laurent Vouzly) and that she was no longer a sex kitten who has hits. Witness, this song, " Schoolgirl" which speaks of her sister Roxanne.
"I wrote it during the disquieting era of the Chernobyl disaster," says Kim. "When I talk about radioactive pollution, it is mainly for stigmatizing all that and give some hope to all children of the world!"
In the same vein, found on the album: "Missing", which she wrote with guitarist Steve Byrd after seeing a broadcast on the misery of Mexican immigrants illegally entering the United States....
All this indicates, in fact, there are many other concerns other than 'love always' or 'love has gone'.

The step was taken: Kim Wilde is considered a singer who has clearly matured a few years. Musically and the themes treated in her lyrics. Her favorite songs remain obviously those she made herself, like "She has not got time for you". An atmosphere of a nightclub in the early hours, and a personal song. She describes exactly how she feels.
"When I sing the words of other lyricists", she said, "I feel like an actress who has to learn a role and play your best. When I write, it is the emotion that comes back to me when I sing; the emotion that I had put in the notes and words at the time of creation of the song".

Fulfillment and maturity are the two words that come up most often in the writings of specialists about the latest songs of Kim Wilde. I adhere completely to their point of view... But that prevents she is awfully beautiful too and that I should prefer the nights with to those without Kim Wilde, right Laurent Voulzy? 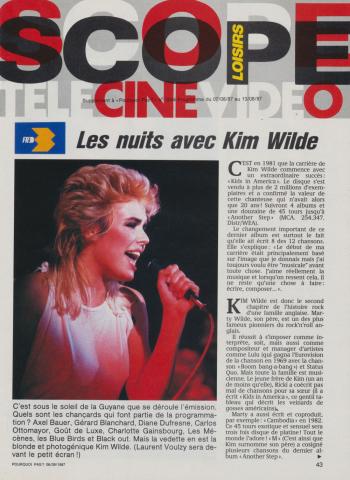 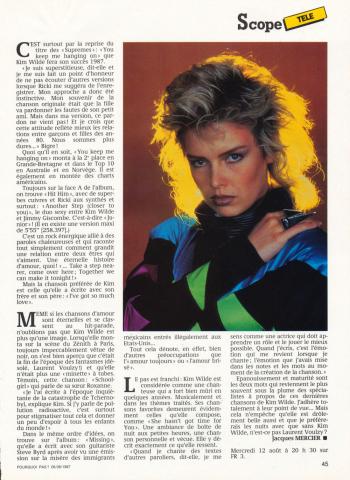 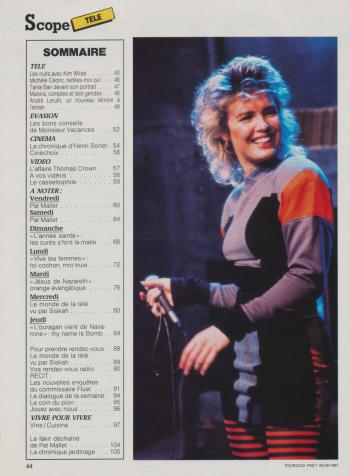