When I was seventeen

"I look back on being 17 as an emotionally turbulent time. I still have incredible highs and lows but my life now is a lot calmer. You have certain questions at 17, which by the time you're 26 you'd hoped to have answered, but nothing really changes - there are still as many questions.
At 17 I'd just entered the sixth form college at school. I remember I started to enjoy it more because up until then I hadn't been particularly mad about - and I wasn't really one of the high achievers.

I'd decided to take government and politics and art 'A' levels because I'd done well at an '0' level and was really interested in current affairs.
During that year I seemed to flourish. I hung around with a crowd of girls and we son of dominated the sixth form. We weren't bullies or anything. but because we were a bit - I suppose we intimidated the rest of the girls. The others - either into knitting and talking about their boyfriends or they were really academic. I remember I often used to miss classes though and I'd come into school in the morning and book into the sick room. I'd get straight into one of the beds and say I had really bad period pain. Then I'd get up for lunch.

My best friend was a girl called Clare and she's my best friend to this day. She lived round the corner from me so I spent most of my time at her house. We used to do nearly everything together and, around this time we were into pubs and going to parties, I'd passed my driving test, too, so I used to drive around in my mum's car. It was brand new and looking back, I can't think why she let me use it so much. Going to pubs and discovering alcohol was my downfall, I think. I often used to get drunk and we used to order these vile concoctions. Even during the day we used to sneak out of school and go down the pub. I suppose you could say I was a bit of a rebel.

And also, I desperately wanted to be independent. I had a lot of jobs during this time and I couldn't bear to ask my parents for money.
During the Summer I had a job selling carnations in a greenhouse and I had a job at Harrods in the sales. One of the hardest jobs was at a hospital. but it was also a real laugh. Clare worked there too and we rnade loads of friends. Two of the porters had crushes on us and one of them really took a shine to Clare. One lunchtime she came into the staff-room and she was flabbergasted - the absolute classic had happened.
The porter who fancied her had pushed her into the broom cupboard and tried it on with her, but she managed to fend him off with a broom!
That year I also started to come up to London on shopping sprees. We'd stopped wearing school uniform so we could wear whatever we liked. I used to wear old jeans and sweatshirts - really dowdy stuff actually, and quite tomboyish. And I remember buying a red jumpsuit from Fiorucci. In fact, I never wore anything sexy or feminine.

I'd sort of discovered make-up and my mum taught me about skin care and the cleanse, tone and moisturise routine. I wore kajal inside my eyes and I couldn't believe what a godsend it was. I remember thinking: make-up's going to be the making of me, and of course it has been.
I a1so had highlights put in my hair and it was the first step towards me wanting to go completely blonde. I went through a stage of feeling really dumpy and unattractive and then I started to feel prettier and quite happy with myself. Life became far more interesting, the more I learnt how to use make-up, and I began to like my face. Before that I'd wanted to have everything I didn't have - like I wanted to have thin hair instead of thick hair - but at 17 I'd begun to reconcile myself to the way I looked.

I kept a diary during this time and I had a flick through it recently and saw that I did have a bit of a problem with spots and weight. I was frantic to be as slim as possible, and a1though that's still something which is very much a part of my life, I'm much happier now.

I had a real thing about being trapped by men in relationships even though my parents were really happy and a1ways have been. I didn't have a proper boyfriend and I was very envious of lots of girls at school who seemed to have everything - looks, confidence and tons of boys after them. But I wasn't virtuous in the carna1 sense and I'd discovered quite a lot about sex by that age. Sti1l, as far as my parents were concerned I appeared like a paragon of virtue. They weren't really strict with me, but I wasn't a1lowed boys in my bedroom - that was strictly non-kosher. In retrospect, I suppose I was really leading a double life and, a1though I love my parents a lot, they really didn't know me at all. It was a time for discovering who I was and what I wanted, and my mum couldn't really help me because we were fighting so much. She a1ways wanted me to help with the housework and she's the most tidy person in the world. In contrast, I'm really messy and I used to throw my clothes all over my bedroom and often right the way down the hall. Maybe I was rebelling against my mother trying to discipline me.

I remember desperately wanting some privacy. Ricky, my brother, had the room next door to mine and surprisingly he didn't figure much in my life then, which is amazing because he plays such a large part these days. I used to babysit for the kids next door and they were always in bed by the time I got round there, so I had the whole place to myself. It was lovely and I really enjoyed having some peace and quiet. Our house was always full of people and there were lots of comings and goings, and although it was quite enjoyable, all I really wanted to do at the time was run away and be anywhere else - just to have some time alone.

I think I really did reject my parents because I didn't want to be somebody's daughter any more - I wanted my own friends and social life. And I'd definitely decided at that point that I wanted to be a singer. On January 15 1978, I wrote in my diary - I've made up my mind now. I want to be a singer - and a successful one. And if I don't give it a try I know I'll always be frustrated. Musically, I was into a lot of my dad's records - stuff like Joni Mitchell, Aretha Franklin and George Benson. And I was a real1y big fan of Elton John. He was my ideal man -the sweet, sensitive, complicated person - and he's still the sort 130 of man I go for today. I never went for the pretty boys. They never held any interest for me other than to leer at - I enjoy leering enormously, bui that's as far as it goes.

I also remember going to see Shakin' Stevens that year. My mum and I went to see him in the E1v1s musical. I think I quite fancied him and my mum kept on saying how goodlooking he was and I said, 'Mmm, I suppose he is really. It's funny actually because I think it was Shaky who kept me off the number one slot - I think it was when I had 'Kids in America' out. Generally though, looking back, they were very emotional times and, to be honest, I wouldn't want to go through all that again for the world." 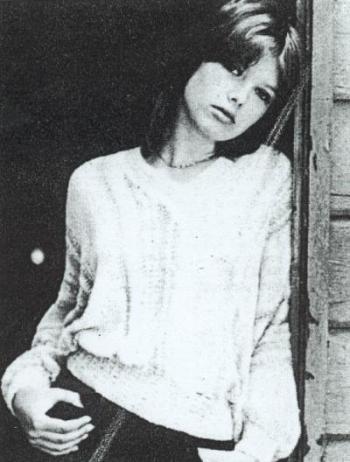