Who needs a man anyway?

A permanent man might be the best accessory for some girls, but he's not essential for the survival kit of a woman who's made it.
Just ask independent stars like Selina Scott and Ruby Wax. And, if you can afford it, Joan Collins.
The average lone woman earns her own woman and puts up her own shelves - so who needs a man about the house?
Here Linda Franklin talks to six girls who have everything - except a man.

Pop queen Kim Wilde knows what it's like to writhe about on a bed with four near-naked men. Not for real, of course. Kim's steamy interlude was all in the line of duty - for the video promoting her raunchy new single, Say You Really Want Me.

Kim says: "Men can be a tremendous distraction. The ideal is that they fit in perfectly and let you get on with what you want to do - but I've yet to find one who does. I'm 26 and single. It's my choice and I feel very good about it. I'm ambitious and I want to concentrate on work for now. A lot of women get involved with men for security. Obviously, I don't need that. And I don't need a man for emotional support because I already get that from family and friends. Marriage is definitely something for the future - but not now. I make my life work very well by itself." 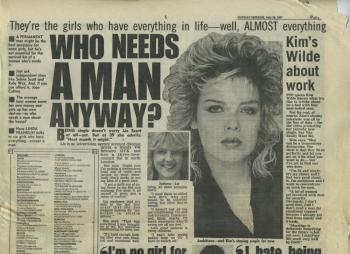