Wilde: chart-topper with 'the Bardot look'

Kim Wilde is the dazzling chart-topper whose sultry blonde looks and shimmering sexuality have poclaimed her the Bardot of pop.

Fans see her as the ideal woman. Men wish they could be with her, women wish they could be like her.
But when she arrives at the fashionable London restaurant, unmistakably beautiful in her trademark black, she is full of apologies for the way she looks and pours scorn on comparisons with the French sex symbol.

"Bardot is a natural beauty, and I am not", insists the 26-year-old songstress, who recently hit no. 2 in the British charts with You Keep Me Hangin' On. "When Bardot was younger - and this is the clue - her beauty really hit you. But if you saw photographs of me as a girl, you'd wonder who the poor thing was: I wasn't a very beautiful child."

She orders a champagne truffle - "God, it's fattening and bad for the skin, but what the hell" - and explains: "What I saw in the mirror this morning was a bitter disappointment... the face, the hair, it wasn't happening at all. The problem is that I don't have a strong shape to my nose, or to my eyes or lips, and I can't live without an eyebrow pencil because my eyebrows are virtually non-existent. I just have a naturally unremarkable face: it's uneventful."

Which is more than can be said for the lady's career as a pop singer. A few months after leaving college she zoomed to stardom with her first single, Kids in America, written by her father, '50s rock idol Marty Wilde, and her brother Rick.

Hit followed hit, along with albums like Catch As Catch Can. She was mobbed and feted. Her concerts were sell-outs. But then, just as quickly, it was over. Her records were ignored, her UK concerts cancelled. For four years her recording career languished in the doldrums.

A sort of miracle then happened. Just before Christmas, she recorded a "cover" of the Supremes hit, You Keep Me Hangin' On - and it all but made the number 1 spot in the charts. She followed this a few weeks ago with an album entitled, appropriately, Another Step - a major step forward for her because, for the first time, she co-wrote most of the tracks and even produced the song Missing, which features on the soundtrack of the film Running Scared.

In March, she released the album's title track (a duet with Junior) as a single. She is sifting through film offers. She is appearing live again in British venues like the Wembley Area, and before the year is out she will have taken in tours of Europe, Japan, Australia and the United States.

Kim is right back on top again. The failed pop puppet has become the pop princess recrowned. "Something very positive came out of the dip in my fortunes", claims the singer with the grey marshmallow lips, huge little-girl-lost eyes and the renewed confidence. "I've stopped taking myself so seriously. When my records stopped selling here, I continued to tour Europe, and I became involved with EST - Ernhard Seminars Training, the bizarre mind-bending cult which uses classic brainwashing techniques to abuse and torment its disciples. I knew the whole thing was going to be scary, but I have a very inquisitive mind. So I went along, and I survived. I came out of it, and out of my 'wilderness' period, a much stronger person. I used to be quite sensitive about a lot of things. Now I don't really care anymore."

She contemplates her melon soda and tells me, "After my initial rise to fame I used to think I was different to everybody else, and I worried about going out into the outside world. If I went to the supermarket, I'd wrap a scarf round my head; and I'd only go out in the evenings, because then there would be fewer people around to see me. I'd also be careful about phonnig for taxis, because I didn't want people to know where my flat was. My obsession bordered on paranoia .What was so silly was that I always got recognised when I sought 'anonymity' by not wearing make-up."

But that's all changed now. "I reason that if people are going to recognise me, then I might as well look fantastic. My new inner strength also means that I'm no longer bothered about going out to clubs or pubs. I no longer care if I'm seen in Waitroses... I was there doing my shopping just before I came here. It's wonderful, this new freedom", coos the singer who has earned more than £1 million, "because I really think I was missing out on life before. This came to a head a few months ago when I went to a fair on Hampstead Heath, and I saw Sting with his little child. Everyone knew it was Sting - you can't have a more famous face than Sting - but it didn't bother him. He was just having a great time. I thought, 'If it's all right for Sting to have a good time, then it's all right for me.' It was a magic moment."

Two other crucial factors have contributed to the reformed Kim Wilde; a dynamic self-respect stemming from her new role as a songwriter; and the support of the family.

"I always felt that writing was what the music business was all about, and yet I brainwashed myself into thinking I couldn't do it. Also, because Rick and Marty were so good at writing, and so successful, I felt intimidated by them. It wasn't their fault. They were constantly trying to boost my confidence. But now I think I've conquered my fear, and suddenly everything seems fine."

Kim grew up in luxury in a Hertfordshire country mansion which once belonged to Prince Bernhard of the Netherlands. Her mother was Joyce Baker of the singing Vernons Girls. With a former hearth-throb father, whose hits included 'Teenager in love', and a brother, Ricky, once promoted as Britain's answer to little Jimmy Osmond, she is well aware of her place in the dynastic scheme of things.

'My family are my emotional stability', she muses. 'I have my friends, too, but at the end of the day it is my family who have saved me from going wrong - and under. Without this affectionate ambience around me, I might have become quite bitter when my career dipped. I know for certain that without their love my journey back to popular acceptance would have been a lot tougher."

The girl who emerged from school with eight "O" levels and one "A" level then confesses, "I've grown up, too, not least in my attitude towards men. I won't let them get in the way of my career', says Kim, now without a special man in her life since splitting from her long-term boyfriend, saxophonist Gary Barnacle.

"I've never had much of a good time with any one man all the time. I think I've always been involved with men for all the wrong reasons, which is very selfish of me. My problem is that I like to feel free. I don't like having to phone in and explain to a man where I am. That's why I've chosen to live alone. I've never lived with a man, nor do I have any desire to do so. Maybe I'll find the right man one day who'll sweep me off my feet and make me change my mind. I may even get married one day, but I'd like to do that later than sooner."

She finishes her steak and reflects, "Success, followed by failure, followed by success has brought me strength of character. I have an intuitive feeling that things are going to get far more interesting, though God knows what 'interesting' means. I suppose I'm fated, eventually, to live in France, where my biggest fans are."

She laughs, "Having said that, I'll probably end up with some film director in Los Angeles, have my face lifted every wee kand regard vanity above all the things I've ever dreamt for myself. Maybe, one day, like Bardot, I'll even be a natural beauty. But I doubt it.' 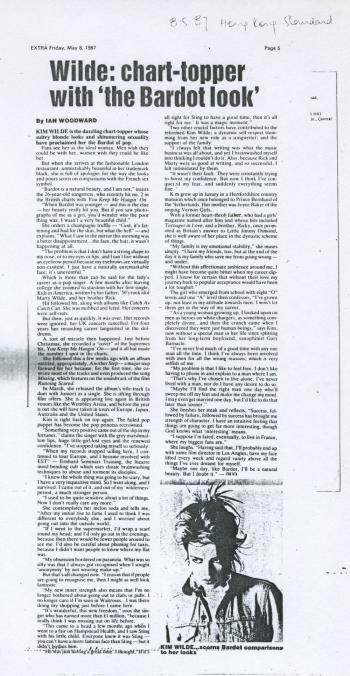