Wilde in the streets

"MCA's tactics towards my career have changed markedly over the last six months", Kim Wilde casually analyses during a marketing meeting... er, a discussion. Wilde is a hitmaker, you see. Not an artist. Not even a singing sensation. She sets her sights on the top of the charts, and by golly, she gets there. Worldwide, she's released 14 singles and five albums (three in de U.S.). At the tender age of 20 she zoomed to numero uno with the poppish "Kids in America", her very first recording. And now, six years later, she's landed back on top with her cover of the Motown classic "You keep me hangin' on". All this is with the aid of her brother Ricki (songwriter, producer, keyboardist), father Marty (songwriter and former '60s U.K. hitmaker in his own right) and mother "Mum" (business manager). They're the English Osmonds.

"Oh, don't say that", Ricki groans. "We just know that together we make great records".
"It's not religion that keeps us together", Kim butts in, as sisters do. "It's more along the lines of mutual respect."
"It is religion in a way", Ricki politely corrects, with brotherly concern. "Music is a religion. It's probably what keeps us together."
That and the cash. They earned a bundle from "Kids" when their former record company wagered that the song wouldn't sell by giving an extra point if a million copies were sold. It sold, and the Wildes raked it in. They hope to do the same with the latest LP, Another Step.
"We didn't make an album just to release a hit single", Kim states. "We made an album to release a few hit singles. The album is one that you have to sit up and listen to. It's not bubblegum music."

Unlike "Kids in America", one supposes, which Kim says is "one of the finest pop records ever made", though she's not sure what the song's about. "Well, I dunno. My dad wrote the lyrics and I think he wrote it from what he perceived the American youth culture to be. Fast and young and spoiled and out for fun. Compared to the British youth, it's true."
So "Kids" may have been a fluke but "You keep me hangin' on," on the other hand, was carefully chosen because of its newly discovered meaning in an '80s context, right?"
"I bought a new computer keyboard and I was just mucking about playing chords for rhythm, not realizing they're the same chords for 'Hanging on'," says Ricki the wunderkind. "So we did the song".
Hmmmm. But surely, Kim, you studied the Supremes' original to better juxtapose it against your updated, new and improved version?
"No, I had no preconceived ideas as to how to do it. I hadn't listened to Diana's version. I made a point of not listening to it, and I haven't listened to it since, actually."
There you have it. The Wildes make no bones about the fact that they simply "try to make hit records, and we've been making records together for six years now."
Some years were leaner than others, but as Kim philosophizes, "That's the way it goes, the way the cookie crumbles - when you're hot you're hot."
And at the moment, Kim's quite hot. Not bad on the eyes either. She's got milky white skin, dreamy doe eyes and exactly the right amount of baby fat to be considered "luscious" as opposed to a Pillsbury doughboy lookalike. It's no wonder that in France they call her "the Brigitte Bardot of rock". Except they say it in French, of course.
"It's quite, um, serious," she says, trying to keep a straight face. "I don't smile much in photos. I'm quite mysterious there and most definitely rock."
So naturally les continentals will plead with Kim to star in films directed by Jerry Lewis, right? "I'm not particularly interested at the moment", she coos, possibly holding out for a greater percentage of the foreign cable-cast rights. "But I could be tempted if it was an interesting script, an interesting co-star, a good director, a good idea and that kind of stuff."
Wilde. 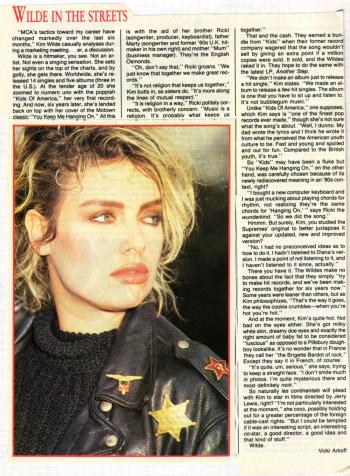