The golden girl of the British pop scene is winning over the kids in America fast. Kim Wilde's update of 'You Keep Me Hangin' On' raced to number one and her video to 'Say you really want me' is currently steaming up TV screens. No wonder her album 'Another Step' went gold. With her tough girl persona and deep voice, Kim is proving the vitality of old-fashioned rock and roll.

An unconventional idea: attaching bold-shaped brooches in unexpected places - up a sleeve, for instance. Silver pins and ring by S. Tek Design. Body-hugging stretch dress, in red, about $132. From Body Map.

Black to the future - an all-black outfit sparked with a collection of unusual silver jewellery. On the jacket, Bar pin (on left) by Monty Don; nose cones and bar (on right) by Butler & Wilson; the 'Bladerunner' discs by Michael De Nardo from Janet Fitch. Earrings, Butler & Wilson. Black cuff, A la Mode by Joaquin Berao. Denim jacket, about $211, and skirt, about $112, from Katharine Hamnett. Silk organza blouse, about $265, Rifat Ozbek. Hair, Yoshi Hirose; makeup, Michi. See Fashion Guide for details and stores, next to last page. 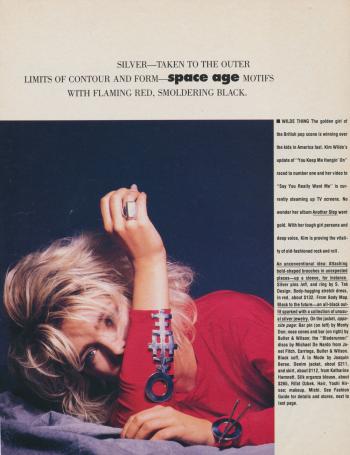 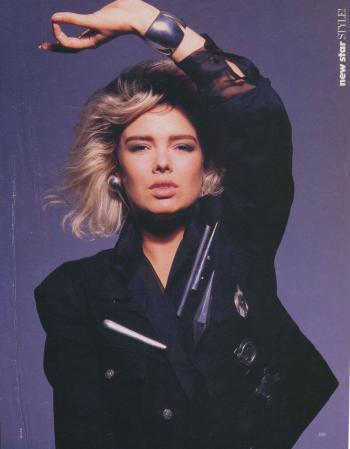