Wish you a very Melly Christmas

It's Christmas (No it's not - Ed) and who better to celebrate it with than Mel & Kim? (They don't look much like Mel & Kim to me - Ed). As you know, Mel & Kim (Oh you mean Mel Smith and Kim Wilde - Ed) have the hit of the festive season with their Comic Relief charity single, 'Rockin' around the Christmas Tree', so we grabbed the gorgeous duo as they prepared to open their Chrissie pressies (Look I keep telling you, it's a bit early - Ed). "I can never wait to open my presents anyway", admits Kim. "They're the few presents that I actually get, sniff". Aah, So Kim doesn't get many pressies, eh? Well here's what Kim and Mel would like to give a few, er, 'deserving' celebs. Alright yes and to each other...

Mel
Kim: I don't know him well enough to get anything too personal. But he's just been rather ill so he needs a rest. I'd buy him a ticket to Barbados and make him go.

Kim
Mel: She can have the other ticket on my holiday to Barbados. See you there, Kim.

Griff Rhys-Jones
Kim: I'm not sure I'd give Griff a present. I don't thnik he'd give me one.
Mel: I'd probably give Griff a peg for his mouth because although I love working with him, he's a great big chatterbox. Sometimes you just wish you could get a moment's peace.

Anne Diamond
Kim: I'd get her something for her baby. Something really original like a pair of booties.
Mel: A long holiday somewhere (Mel is not being charitable). I'd pay her to go on a very long cruise.
Kim: Mine was meant much more diplomatically.

George Michael
Kim: I'd buy him a really great pop-up book. One of those beautiful ones with fairy tales. I'd love to get one of those. I like giving presents that I'd like to get.
Mel: What do you think? A razor! Must be! Perhaps a Braun Ladyshave so he can do the legs as well. And some foam. All the bits.

Marty Wilde (Kim's Dad)
I'd buy him some CDs. That's what I did last year. He's a CD fanatic. Most of his are classical but he makes me listen to loads of Elvis Presley and Eddie Cochran and they're very good.

Neil Kinnock
Kim: I'd buy him the book Eric Morecambe's son's just written about his dad. 'Cos I think Eric Morecambe has a lot of humility and intelligence and he could teach Neil Kinnock those things. I really miss Eric Morecambe. He reminds me very much of my father, in appearance and humour.
Mel: A hit-man to knock off Eric Heffer.

Frank Bruno
Kim: One of those Kaleidoscopes you look through. Imagine him looking at one of them for hours!
Mel: Elocution lessons. And maybe English As A Second Language courses. The ones you get in Tottenham Court Road.

Dame Edna
Kim: I think he's a very romantic person. Although he's probably got it I'get him 'Songs for swingin' lovers' by Frank Sinatra on CD.
Mel: A weekend away with Les Patterson (Dame Edna's other personality, a wonderful dribbling slab and cultural attache to Australia).

Selina Scott
Mel: A nice boyfriend! Harr! Harr! (Mel seems to know something we don't here. So amused is he that he topples sideways out of his trailer). Yes. Keep her off the streets.

Bob Geldof
Kim: An album of Irish rebel songs. I've got a friend called Divine who's really into them. She teaches me them.
Mel: I'd buy him Bob Geldof's Greatest Hits. It's an EP.

Eddie Murphy
Kim: A green Morris 1100. I used to have one of those and it was awful. But he could make even that look good.
Mel: A decent film script. I went to the premier of Beverly Hills Cop II. That is the iggest pile of s**t you'll ever sit through in your life. I would have walked out after half an hour but you weren't allowed to 'cos there was royalty there.

Jonathan Ross
Mel: Jonathan Ross, ha, now there is someone I don't rate. Not at all. There must have been the most incredible vacuum somewhere for him to have become anything at all. What can I get him? Oh I'll just wish him luck.
I wouldn't get him a present. I'd just send him a card. Actually he's the sort of person you'd send a five pound book token.

Bananarama
Kim: I'd give them a copy of the single as they get a namecheck at the end (Griff asks for Bananarama for Xmas). Signed copies of course.
Mel: A night out with The Bachelors (ancient hideously pleasant pop group). Hur hur.Margaret Thatcher
Kim: I'd give her membership to Greenpeace. I'm sure she is a member but just in case...
Mel (stumped): It's so full of possibilities I don't think I can answer that. Something to do with the inner cities... 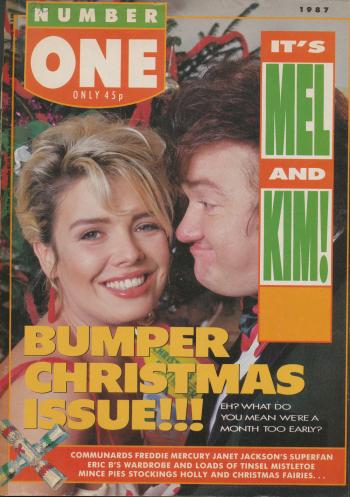 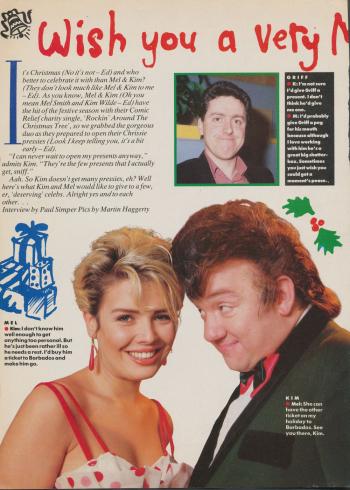 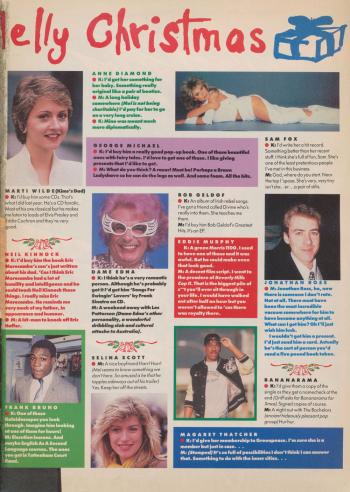 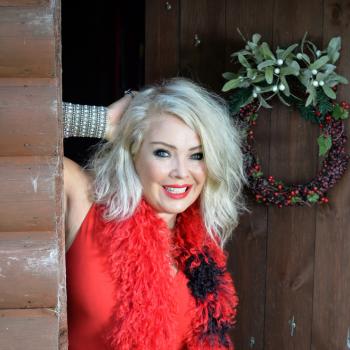 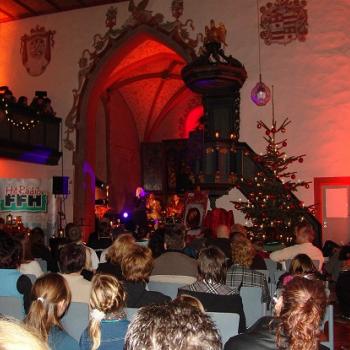 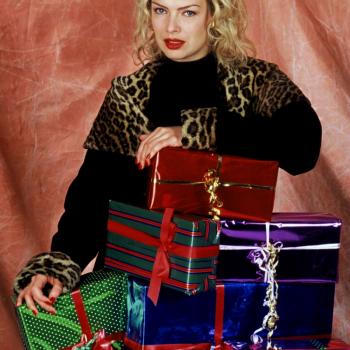 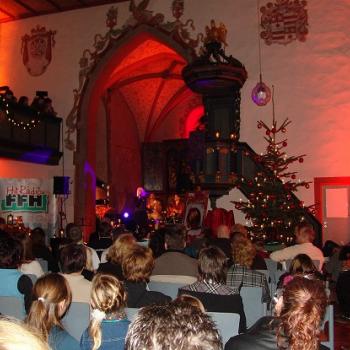 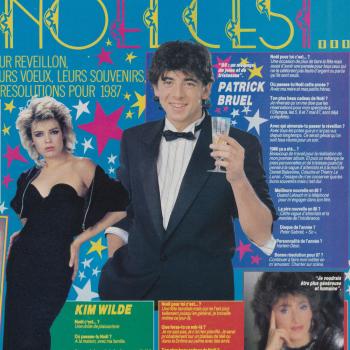