When Kim Wilde returned to business and the big time with her album 'Close' and the hit 'You came', the newspapers again celebrated this lady. Let us glance at a week in the busy world of this blonde.

Kim starts the week on Monday, as is customary in the Christian world:
Just finished the 15th gig of the tour with Michael in Cologne, West Germany. It was a great gig, the audience were really enthusiastic. I had a last minute call to fly back to London to appear on Wogan and Top of the pops so off I went. The tour bus drove off at the airport with all my stage clothes in it and we had to frantically call it back by radio telephone just before I was due to fly off.

Tuesday: Doing Top of the Pops was nice because I met The Communards down there, I really like them, I knew their drummer June really well, from the days when she used to be in a band called the The Modettes. It was nice seeing her again. The producers asked me on the spot to present Glenn Medeiros with a birthday cake because he was 18 years old. It was pretty awkward, but he turned out to be very sweet and I was really impressed with his voice because he sang live although I don't like the song.
After doing the filming I felt really tired so I went back to my flat (in north London) and my best friend Claire came round for a drink. She was just getting ready to go off on holiday to Greece and I was really jealous of her.

Wednesday: In the morning I had to go to my record company MCA and do lots of phone interviews with Australian journalists. Most of the questions were about Michael... 'is it true he's been buying you lots of flowers!' and 'has he really fallen in love with you?'... silly questions like that!
I think a lot of people have just been using me to get to Michael anyway, although at the same time being on tour with him has been great for me and given me a lot of public exposure.

Thursday: A whole day off! I couldn't believe it! It was the first complete day off I've had since the tour started.

Friday: The concert tonight was wonderful. It was in the Olympic Games Stadium and it's a beautiful stadium. Tonight was special because after my set one of Michael's men asked me if I'd like to go into Michael dressing room and meet him. I was excited because it was the first time we'd met since the tour started. Well, we didn't exactly engage in deep and meaningful conversation because it was only five minutes before he waent on stage but I still thought he was sweet. He had a lovely smile and when he put his arm around me he was ever so gentle and he said... 'hello Kim it's very nice to meet you' and I said the same and thanked him for giving me the opportunity to be on tour with him and that was about it. People, especially journalists, don't believe you when you say he's a really sweet guy. After we'd met I went off to the side of the stage with his manager Frank and we watched the show from there. He was absolutely brilliant.
Usually after my show I unwind with a glass of wine and a chat with my band or else I go back to the hotel with Michael's band and a few drinks and then it's off to bed.

Sunday, the day off for Christians and the day when it ends: Another well-earned day off. I treated myself to a curry for lunch and my friend came round later and we had a good old chat. I was so tired I decided to have an early night. A bit boring but quite an eventful week nevertheless, don't you think? 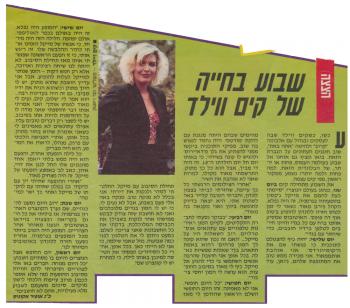