Bald people? Bedonnants? It does not matter... Kim Wilde doesn't care about the physique of her lover. At least, it is what she says...

If I am in love? Sure, I love life! Having a relationship isn't important for me at the moment, my work and my career are more important. But if you really want to know what is my ideal man, I can tell you that the exterior isn't that important. He doesn't have to be wildly attractive, as long as he knows about music and has something inside of his head!" Said Kim Wilde in a recent interview. Since that day, us lovers of this splendid creature have tried by all the means of taking weight (and it is not difficult, believe me) and we have spent millions for treatments supporting loss of hair. After which, we patiently waited until she grants another interview to us, convinced that the business was in the pocket. We weren't counting on competition from a man named Calvin Hayes, guitarist of Johnny Hates Jazz, with whom Kim is officially engaged since some time.
Nothing to hide you, he is neither a large nor a bald person. But Kim, whom you made there, you could have had us, fatty and bald, and you took a beautiful man with hair! Ah, the love is blind...

The list of courtisans Kim has had consists of people like Terence Trent d'Arby, Julian Lennon, Laurent Voulzy and Etienne Daho who have all lost their heads at some point in time. She has always denied these facts: "With Terence and Julian, I've never had more than friendship". But unfortunately for Kim she can't deny this one: her affair with Calvin took place in the public domain. They were seen dancing together during a party in London.
"It's true ,I have never been this much in love, I feel like the luckiest woman in the world! Calvin is really an extraordinary boy". Us, we are maybe jealous but to tell you the truth, we think it's him who is the luckty one! It depends on your point of view! 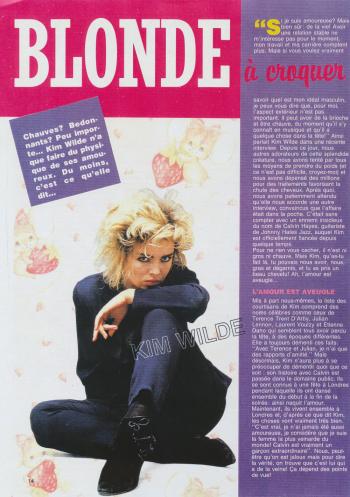