Kim Wilde is in love with Calvin Hayes, drummer of Johnny hates Jazz. That is reported by an English newspaper. According to Kim they have the same taste in music, movies, tv and clothes. According to Kim they have known one another for years, but in the past months something called love has grown. (Do you love romantic stories as well?) Okay, we go on. Kim is glad she's fallen for someone from the popbusiness: "You know one another and eachother's problems. I am in the company of men a lot because of my work. Calvin understands that. An accountant might have trouble with that." Marriage plans? Kim: "I'm not thinking of that at all. Not about children either. My mother has recently had children at 45. That doesn't make me feel I have to hurry. I am 26. My record 'You came' was dedicated to a child. And it wasn't about an orgasm, as some suggested." Don't look at us now. 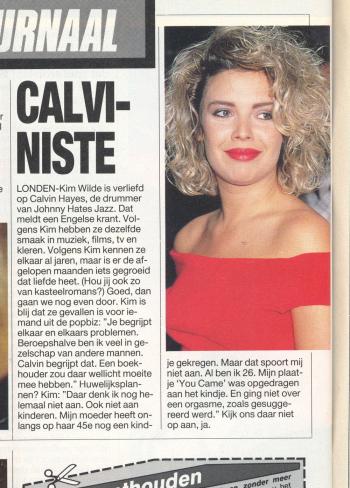