Kim Wilde has been a teensy bit busy recently - what with promoting her latest hit single, not to mention touring with Michael Jackson. It's quite amazing how she still finds the time to do her washing, and let us have a quick snoop at her diary...

Woke up in yet another strange hotel room, this time in Cologne. Had breakfast, and attempted to get myself organised to catch my flight to London. Arrived at the airport, and opened my bag to find it full of boots! I'd taken the wrong bag with me. Phoned the hotel and explained the situation, and they somehow managed to book a Nelson Piquet type cab driver to bring the right bag to the airport. He arrived literally ten minutes before my flight was due to leave.
Arrived in London for the first time in six weeks - and went straight to the Wogan studios in Shepherd's Bush. I've been on Terry's show before, and my dad knows him really well, so he's a bit like a family friend. The show went well. I played my new single You Came and had a bit of a laugh with my band, who I think were really glad to be home!
Went home after the show, and some friends came round to my flat for a few drinks. It was so good to see them after six weeks. Most of them i've been friends with since I was at junior school. And what's more - they're so down to earth, which is really healthy for me, after spending weeks in the company of Michael Jackson.

Up early again, this time to go to the Top of the Pops studios. The chauffeur-driver limo arrived at the flat, and I got in feeling every inch like a royal. Bumped into June, the drummer from the Communards, and she told me that she's pregnant. I love kids - my brother has a two-year-old called Marty III, who I really adore, so we had a bit of a baby chat.
had a nice chat with Patsy Kensit after lunch. I remember watching her stick her finger into her mouth, looking as fresh as a pea in a pod (you what? - Ed.) Ahhh those were the days!
Went home after I filmed my bit, had a bit of a clean round the flat and went to bed.

A lie-in this morning which is a luxury these days. After a couple of hours doing nothing, I popped round to MCA (Kim's record company) as I had to do some telephone interviews for some Australian magazines. Had a moan to Chrissie, my press officer, about how I didn't really like doing interviews over the phone. She explained that it might be slightly inconvenient popping over to Oz for just one or two little chats!
My mum arranged a family dinner tonight to celebrate my nan's 78th birthday. Mum cooked the dinner, and I hung around to add the finishing touches to the table decorations and things. My grandparents asked me what countries I'd been to with Michael, and nan told me that she was very proud of me - I think she's got to be my number one fan. I also explained to them that you can't believe everything you read in the newspapers. I hadn't in fact met Michael by that point, and I wasn't earning £2 million from the tour, contrary to the press reports.

Day off - well almost! I sorted out my clothes for the tour, stuck them in the washing machine, and headed down to the local swimming pool for a nice long swim. Arrived home to find my brother with his wife and little son waiting on me. I almost hugged my nephew to death.
Once they'd left, I watered the plants, gave the flat a good going over with the duster, and then made my way to heathrow to catch a flight to Munich, for the next leg of the tour. Bumped into Green from Scritti Politti at the airport. He asked me how the tour was going, and how Michael was. Arrived in Munich, met up with the band, and checked into the hotel.

Showtime again today, so it was up at 11am, and off to the Olympic Stadium in central Munich to do the soundcheck (man!) That took about an hour, and everything sounded fine, so I was quite happy.
The actul concert went really well - probably one of the best to date, even though it was the biggest crowd yet - 72,000 people. The whole place was rocking. Came off stage about eightish, all hot and sweaty, and went straight to my dressing room. My maager came in, and asked me if I could be ready to do something at nine. I told him I was tired, and didn't really fancy the idea of doing any interviews or anything. He then told me that Michael Jackson had asked to meet me, and I nearly died! I had no time for a shower or anything.
Michael was so nice, and he had the most sweetest smile I've ever seen in my life. My heart just melted! I thanked him for having me on his tour, and then he was off to do the show. I watched from the wings, and he was pure magic. Today was one of the best days of the tour.

Travel day today - not my idea of having fun, but it's got to be done. Met some of Michael's tour people before I got on the bus, and they shouted "How ya doin' Madge?". They all called me Madge - short for Your Majesty! They're a great bunch.
Travelled from Munich to Frankfurt - a good eight hours' drive, but I'd psychologically prepared myself. I took my books and Walkman onto the coach with me, but I ended up just chatting to everyone instead. We chatted about last night's gig, whether Shakin' Stevens dyed his hair, and other worldly issues!
When we arrived at Frankfurt, I met up with Frank, Michael's manager, and he asked me if I want to go through the town with Michael's cavalcade. Jumped into his limo, and whizzed through the town with a police escort, lights flashing-the lot! Such fun.

Woke up late, and travelled into the gig in Mannheim. Did the soundcheck, and then a bit of topless sunbathing, until snooty helicopters started circling me!
Tonight was the first time I've ever played a concert in a race track, which I thought was a bit strange. Got a call from London, saying that my single is doing really well in the charts, so I feel totally inspired to go in front of the 70,000 people and have a great time.
Watched Michael's show once again from the wings and, during the interval, his keyboard player played an instrumental version of my record Hey Mister Heartache which I thought was really nice. After everyone left the stadium I went on stage for a snoop. Funny to think that half an hour arlier over 70,000 people were dancing about. All I could see was an inflatable Pepsi can which someone had left behind.
Went back to the hotel and got myself prepared to travel back to London after a truly hectic week... 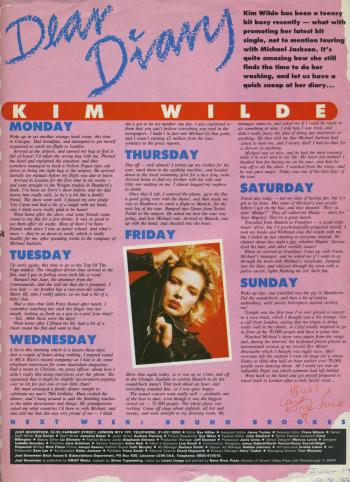