After a worldwide hit, "You keep me hanging on", last year, the beautiful Kim Wilde disappeared for a while. She used the time to prepare new songs together with her brother Ricky. "You came" is the first of them and Kim talks about her projects.

Your sixth album in seven years since "Kids In America", is released today. What evolution has occurred between your latest songs and the new ones?
I think it is first a change of sound, it's a more mature album , in the same vein as the previous anyway, but a little more soul and then my voice has improved over time; we went further on it. It is now extremely difficult to talk about my music, this is not a calculated thing, it's something that belongs to me and it naturally progresses.

Are you still working with your brother?
Yes , it is with Ricky I wrote the songs and it was he who was responsible for the production.

And your father, Marty Wilde, one of the great figures of British rock?
My father was working on my album at the beginning , but now he leaves us on our own, my brother and me.

What is your personal contribution to the writing?
Increasingly important. I started writing my own songs there four years, for two albums. The last year, I learned how to use studio technology. Today I know how to program sequences on a Fairlight 2 and to record a demo on twelve tracks but I 'm still not producing myself. I am quite the amateur level, but I can do what I want with the hardware.

Your favorite instrument?
Definitely the keyboard! Everything can be reproduced on a keyboard these days, strings, brass, timpani... I love it!

"You keep me hanging on" was a cover of the rhythm 'n' blues hit from the Sixties, interpreted by the Supremes. Is this one of your influences?
I love the music of the Sixties, and Ricky too, that's why we made this cover, but we have a very Eighties sound, not at all like the original. It became a real pop record of the Eighties. The new album definitely has a black color. Lately Ricky and I listened avond lot of soul artists such as Anita Baker, but we are not attached to it. We wanted to make a very powerful pop album with real themes pop and dance music .

How is working with your brother?
It is not always easy... He knows me so he will let nothing slide. He'll say: "That's not it, Kim, it's poor, you have to start over" bluntly. Sometimes it bothers me terribly that it is not as nice to me, as may be other people. We no longer need to talk to understand but it sometimes makes very strained working relations. Fortunately, as a rule , it is pretty cool to work with Ricky , he always has wonderful ideas. And anyway, I love him.

You said your parents listened to the same music as you...
Yes, at home I discovered, thanks to my father, the Beach Boys , Aretha Franklin, Mike Oldfield and many others. This is the same one who made me love Kraftwerk in the "Autobahn" era. I found that synthetic music announcing the new wave, Depeche Mode and others, terrible. And then he convinced me and I started to like it! The taste of my father is very broad, so he also has an impressive collection of classic compact discs. My mother , she is a fan of pop singer Dusty Springfield .

You go on tour with this album?
In fact, I'm in full rehearsals at this time, I'll do the first part of the european tour dates for Michael Jackson. For the occasion I have a real group around me and we will play my greatest hits and the strongest tracks on the new album.

Did you take dancing lessons for the live performances?
Oh no! Dance, I leave that to Michael, I 'm not going to enter into competition with him on this ground, also it would be doomed to failure.

When you have time to live at home, what are you doing ?
I have my flat in London but I have very little time to take care of. I furnished with furniture unearthed in antique shops, from different eras, and I restore some of them. Moreover, when I'm home, I wash clothes, I clean, I call friends , I pay the bills and I take what is left in the fridge for six months ... An old dried cheese or something or other... I often dine out with my friends, in restaurants not too expensive because I have many unemployed friends, then attention must be paid to the charges...

You have any friends that are singers ?
Yes, and I 'd like to meet them more. I love Nick Kamen, Rick Astley ... And Etienne Daho course. I met him on the plane coming to Paris, he made me listen to his album recorded in London, it will be called "Fat" and I can tell you it is great ! 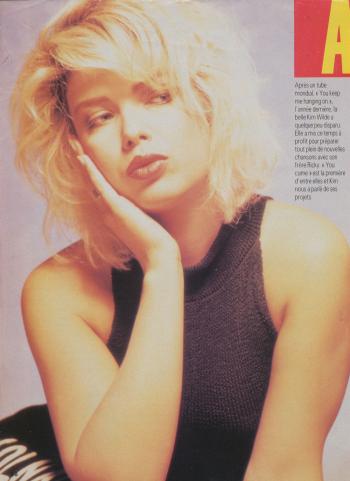 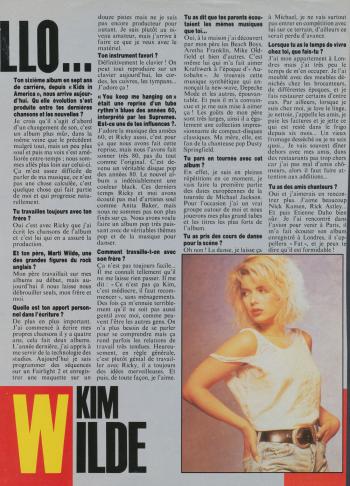