With 'Hey Mr. Heartache' Kim Wilde has been able to embody her musical talents, as well as her famous flirtations like that with Simon Le Bon.

"I can not explain why Michael Jackson really wanted me to be a supporter of the European tour. I only know that his managers have contacted me and so it simply happened!"
To talk like this is Kim Wilde, the English blonde singer who has been fortunate to accompany mister "Bad" on tour here also in Italy. It has been a long time coming, but certainly this is a very important stage in Kim's artistic career. She speaks about him with pleasure and enthusiasm, but without too much head up. "Maybe Michael liked my music, but I do not think he thought I was the best artist in Europe, of course!"

Kim's career began several years ago, thanks to the help of her father (famous musician), and her brother, who wrote the pieces. Her first success, a real torment for a different time, was 'Cambodia' in the early 1980s. Since then, Kim has recorded six albums, but here in Italy he never managed to break through completely. She has achieved good success, however, about two years ago, thanks to the song 'You keep me hangin' on '. It was a cover of a 60s song sung by the Supremes of Diana Ross, and Kim came very well, so much so that it was her battle horse. But her fame is also due to her famous love stories, among which stands out with Steve Strange and, above all, with Simon Le Bon. "We went our separate ways because we did not agree!" she says.

Kim this year managed to go very well in the charts with "Hey, Mr. Heartache" from her "Close" album. Maybe this is the good time to break through! 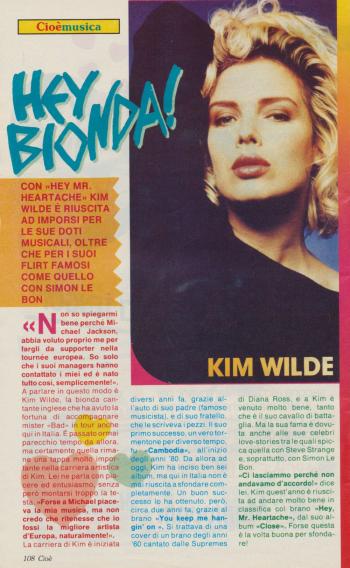