Now that's an invitation you just can't turn down, especially when it comes from Michael Jackson. Kate Davies caught Kim just before she jetted out to join Jacko in Rome on the first leg of his European tour.

So Kimmy, how does it feel to be asked by Michael Jackson to support him during the European leg of his tour?
I've had to pinch myself to make sure I'm not dreaming! I'm thrilled to bits. But I'm also rather daunted by the prospect. It's going to be very nerve wracking but I'm looking forward to it. At least I'll get to see him perform now!

What've you been up to since your Comic Relief single at Christmas?
Well, I've got my new single 'Hey Mr Heartache' out and I've been working on my album which will be out in a couple of months time.

Do you do other charity work beside Comic Relief?
The only other thing I have a personal involvement in is the National Association of Youth Clubs. I go to a lot of youth clubs in the Hertfordshire area to hang out with the kids. Youth clubs are great 'cos you can catch the kids before they go out and wreck the world. I like young people.

How do you feel about the young people in the charts at the moment?
I worry for them. I don't begrudge them their success but when I was 16, I was just discovering life and experiencing the normal sort of things. I hope they have a good set up around them and plenty of support .I wouldn't be 16 and a popstar for anything in the world. I'm very happy I spent 16 being a confused teenager.

It doesn't make you feel unnaturally old then?!
Actually I quite like the idea of being the veteran popstar. I don't mean being Tina Tu7rner, but it's quite fun still being young buty having been around for so long.

How have the past few years changed you?
There are all the obvious things to associate with growing up, of course, but I'm more confident, happier, I know what I want more. I don't know all the answers but I have a lot more than I had five years ago. I'm much happier with myself. I enjoy myself more and I think I'm much more fun to be with. I used to take life so seriously.
I used to be very cagy and on the defensive. I used to get lots of pointed questions from people about my love life and I had the p*** taken out of me 'cos of my dad (60s popstar Marty Wilde). I was dismissed, as many women are, by male journalists. But I've proved them all wrong 'cos I'm writing my own songs and developing in my own slow and steady way.

Do the nasty things written about you hurt you?
Yes, I have been upset, very upset to the degree now that I don't read anything anymore.

Is it true you've done backing vocals for Johnny Hates Jazz?
Yes, it was on 'Turn back the clock'. I've known Calvin for years. I love doing backing vocals. I do all my own on my album. I'm really interested in them and especially listen out for them on other people's songs. I would've been a backing singer if I hadn't made it as a successful solo artist. I love it. I've got loads of ideas for backing vocals. In fact, if anyone reads this and needs some backing vocals, then please get in touch!

What would you do if you couldn't sing?
I'd have a tantrum. Oh God, I don't know. I'd learn how. To me it's one of the nicest things to do. I couldn't seriously consider anything else. The only other things I enjoy but still wouldn't want to do professionally are things like art and interior design.

Do you get a lot of time to do stuff like that?
I've had quite a bit of spare time recently. I spent it going round junk yards and antique shops. My idea of bliss is walking around junk shops. I love old furniture. I love picking up bits and pieces. Actually we recently shot some of a video at my flat and it looked really good. I was very pleased!

Is it true you've been having acupuncture and if so, what for?
Yes, I have. I was getting pains in my lower left side and had it checked out an no one could find anything wrong. I had tests done and they couldn't find anything, but I was still getting the pain. It's been happening for the past three years on and off and I'd just been putting up with it. Anyway, my mum had heard of this guy and I've seen him three or four times now and the pain's gone. I'm not sure how it all works but I'd recommend it to anyone who's at the end of their tether and who's tried everything else. It was actually very relaxing.

Are you the sort of person who can relax, or do you get hyped up easily.
I have my moments, definitely, of being completely wired but mostly they're rare. I'm quite a steady, balanced sort of person.

Is there anything you've not done so far that you'd love to do?
Mmm, I'd like to write a song for someone else to just give me the feeling that if my public decided they didn't want to buy my records anymore they might like to buy my songs. Maybe also I'd write some music for films and maybe get into some acting. But just maybe. I'm not kidding myself. I did some in my new video and I was half convinced. I've turned down a lot of stuff, but mostly because it was all the stereo typed blonde bit. 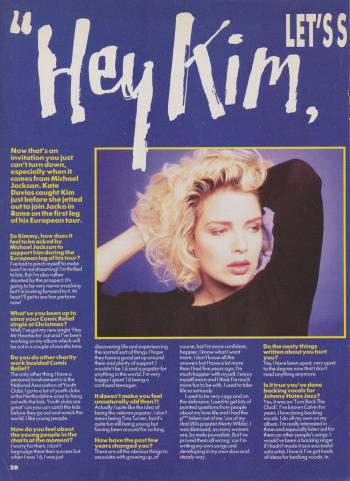 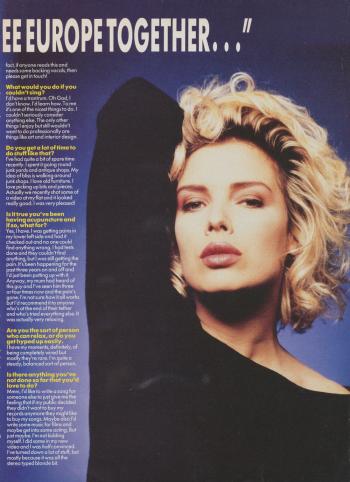