"Hjorup was his name did you say? He's great" said Kim Wilde when she heard Orup's "Stanna hos dej". After the concert she went to a party and heard some Swedish music.

When Kim Wilde sang her old hits on Eriksbergsvägen Shipyard yesterday night she returned to the hotel where the record company arranged a party for her.
- It's the first time it happens on the tour, so I'm feeling really appreciated, she said. Otherwise, she was mostly tired.
- I was tired when I would sing today too, but tomorrow will be probably better. It is only said that I take on myself too much to do and it feels like that sometimes.
Right now Kim Wilde combines the Jackson tour with a PR trip. It's one of the reasons that she never met Michael Jackson a single moment during the tour.
- I have so much to do so I have not thought of that I would like that. And he has not asked for meeting me either.

Kim has not seen so much of Sweden so far, but maybe she will be on a trip to Liseberg today.
In addition, she said, she heard some Swedish music.
- And it's really the only thing I care about.
By what she heard during the evening was Orup what she liked best.
Just when the video was on he additionally entered the party - and was of course featured.
Then Kim had already asked for a cassette and said that she saw him at the VIP gallery earlier in the evening.
- He was the one with the hat. I already thought he looked like a pop star. 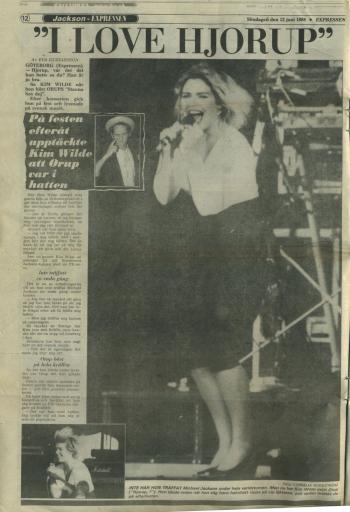