The face is strawberries-and-cream, a scarlet mouth splashed boldly across bone china skin. The body, outrageously poured into taut black pedal-pushers, is topped with a matador jacket. The voice is confident, soaring across a sea of 70,000 French fans as she tells them how thrilled she is to be there.

Kim Wilde is warming to her task as supporting artist to the star she refers to as the world's most magnificent rock performer, Michael Jackson. As the Magical Mystery Man's tour wends across Europe towards a series of sell-out dates at Wembley and around Britain from next month, Kim is having the time of her life.

She never expected it to be such fun. "When the possibility of supporting Michael Jackson first arose, it was something I didn't dare think about", she says. "My first reaction was 'I can't do that!', to which my mum replied 'why on earth not?!'. 'But I can't!' I screamed. 'He's the greatest performer on earth, he's in a different league'. My mum kept on and my dad joined in, then the entire family jumped on the bandwagon until I started to think 'why can't I?'. It's a challenge, I thought. I could fall flat on my face, or I could succeed and be brilliant and have something to be really proud of. I knew it would be sink or swim and I decided to swim for England."

Now with the tour going swimmingly, much has been made of the fact that Kim has not yet been invited to meet Jackson. Kim, however, is not at all worried. "I am sure it will happen, eventually", she says. "Michael's Michael. I'm ecstatic to be on the road with him and he has given me the best opportunity in the world to promote my new album. What more could I expect from the guy - love? I sent him roses at the beginning of the tour - red ones, of course. And that was a personal thank you for the privilege of being here. I know we'll get together sooner or later. He has his way of doing things. I gather he's quite shy and very sensitive to the way people react when they meet him. That's why he's happiest surrounded by children, because they don't have preconceived ideas about him - they take him at face value."

"He heard my little sister Roxanne and brother Marty were on the tour with me at the start and he made a special request to meet them. Everyone was green with envy. They were taken to his dressing room, and they stayed with him for quite a while, chatting and joking. When they got back we all fell upon them with questions, but you know what kids are like - they didn't remember anything. Roxanne told me later that he said to her, 'You're every bit as cute as your sister'."

Kim is definitely cute - but she is also a star. On the tour she has been delivering old favourites like Kids in America and You Keep Me Hanging On, as well as songs from her new album Close. In her seven-year career she as gained millions of fans in Europe as well as the English-speaking world.Kim says she owed all her fame to her parents. Her father is Fifties heart-throb Marty Wilde, who once topped the charts himself. Kim depends on him entirely. "We call him The Essential Person because we can't do without him on the road", she says. "As well as writing a lot of my songs, he's my executive producer. He's the strong one, very laid back."

"My mum takes care of all the administration. There's an awful lot of work involved in going on tour, and she copes brilliantly."

Joyce, a petite woman of 46 in a floral dress and sandals, is Mother Earth to Kim, eight-year-old Roxanne and little Marty, who is seven. "We have a wonderful relationship", says Kim. "She's quite unbelievable. She defends all of us with her life. I suppose our relationship is quite rare. We don't argue at all - we give each other space. We give and take equally. We're more like sisters than mother and daughter. My mum's there, she knows everything about me. She knows me inside out, the good and the bad. We talk about sex, we swear in front of each other when we need to - not that we make a habit of it! But it's a warts-and-all situation, and I'd never want to change it."

With such a protective family around her, Kim can afford to relax and enjoy the tour - and her role init, as the luckiest girl in the world. "I suppose this tour is the highlight of my life", she says. "Everything is perfect. I have my family around me, my album and single are doing well. I have more TV and radio invitations than I can handle, my voice is on form, I feel great. I think I did panic a little bit in the weeks leading up to the tour but I counteracted my nervousness by swimming to get my figure in shape and to open up my lungs."

Strolling down the Champs Elysees for a cafe au lait before being whisked off for yet another TV appearance, Kim is oblivious of the effect she has on passers-by. Taxi drivers negotiate their way out of near misses as fans breathe "Ooh la la!". The French, predictably, have compared Kim with their own sex kitten Brigitte Bardot.

Kim is not impressed. "My sexy image is all tongue-in-cheek. It's just for fun", she shrugs. "Remember, I'm the one who sees myself when I get up in the morning. i think I can be attractive and even sexy, but it's all in the mind, and the make-up bag. My image doesn't embarrass me: it's just the way I am. Looking this way doesn't make things difficult with men. A man might think I was an easy lay to look at but, if I chose to let him get close enough, he'd soon find out that I'm not."

The subject of boyfriends comes up and Kim turns suddenly coy. "I've had one or two", she says cautiously. "Not for now - there's no time to devote to a real relationship. I am happy to hang out with my friends."

"I long to have children one day, but not now. I love kids, and I suppose to do that I'll probably get married. But that's not my ambition in life and it never has been. For so many girls it's their Andy Warhol 15 minutes of fame. I can't think of anything more horrible. I've had my fair share of fame, anyway. If I got married, I'd prefer to do something more funky than swan down the aisle on dad's arm in a white dress."

She pauses and the strawberry part in a giggle.

"I suppose as I get older I get more and more off the wall", she says. "There - I do have something in common with Michael Jackson!" 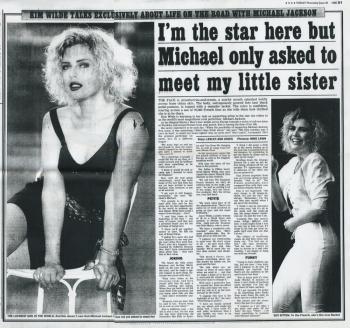