Backstage in his trailer Michael Jackson sits quietly watching a video of Kim Wilde. Dressed for his first number in a glittering white satin jacket he is smiling slightly as he watches the lovely blonde singer throw back her tousled hair and dance across the stage.

As she winds up her act to tumultuous applause he turns to his manager, the flamboyant cigar-smoking Frank Dileo, and says: 'She's good. Sign her up for the rest of the tour.' It was the news Kim Wilde's tour manager Keith Crabtree had been waiting for. It meant that superstar Jackson likes her.

'Kim was booked till the end of July as his opening act on the tour. They wanted to make sure that she was okay and that her team worked well with theirs before committing themselves.'

Now Kim is set to play at Wembley in July and August, Leeds on August 29, Milton Keynes on September 9 and Liverpool on the 11th - as well as Germany and Ireland.

The sell-out tour is a phenomenal success but, though they have been on the road since May, Kim has still not met Jackson. They stay in separate hotels. He arrves at the stadium as she goes on stage and she generally leaves before he finishes. Contrary to reports, however, she is not in the least put out. 'That's just the way he likes to conduct himself. Of course I would like to meet him and I've been told I will very soon', she told me in Paris yesterday. 'I feel very grateful to him for giving me this opportunity. Everybody wanted this tour and he chose me. I get great vibes from his people and I get on really well with his band. I think he's really sensitive about meeting people for the first time. He'll do it in his own time.'

Jackson has gone out of his way to make sure tha tKim does not feel snubbed. When he heard that her nine-year-old sister Roxanne and brother Marty, five, were at the concert in Rotterdam, he asked if they would like to meet him.

On the first night of the tour, Kim sent Jackson two dozen red roses 'just to say thank you for asking me'. So far, he hasn't thanked her personally but Kim is unconcerned. The contrast between the two personalities couldn't be more clearly defined. Jackson, with his 250 strong team including 12 hulking great bodyguards, is the megastar living in splendid isolation. Kim's friendly entourage, which includes her mother, father, sister-in-law and various old school friends, is more like a big family party. They come and go throughout the tour but as one flies out another arrives. 'I just like having my friends with me. I beg them to come out.' Her manner is open and friendly. She doesn't behave like a star yet she is aware of her star quality.

On stage she is a different animal, pouting, sexy, in tight white toreador pants and low-cut top which shows off her bosom. She struts and dances, tossing her head and posing provocatively. With her big red mouth and pert behind she is sensual in the extreme yet she also retains that elusive Bardot-like vulnerability.

Sometimes she likes to slip out unnoticed. 'I slick my hair back and take my make-up off and go out in jeans and a T-shirt. People might glance at me but they just think I'ma girl who looks a bit like Kim Wilde', she says, talking as if Kim Wilde was another person. 'I would hate to be just a sex siren. I'm trying to put across that you can be a woman and express yourself in whatever way you want on stage yet still be yourself. Out there in front of 60,000 people you need strength. You have to be larger than life. Yes, I do feel sexy out there. It's not just the way I move.'

Her new single, 'You came', it out this week and her latest album Close is already number 15 in Germany where she arrives today. 'Eventually I want to write more and produce other people's work.'

Se'll make about £2 million from this tour, much of which she will pour into her lovely old barn in Hertfordshier. 'It's full of hay at the moment but it's something to work for. I love it. Being a famous person it's easy to make that fame a focal point of your life. The barn keeps my mind off who I am.'

'I like to think about the plumbing or whether I should share a septic tank with my neighbour or dig one myself. I'm really into interior design, furniture restoration and paintings. I need the space the barn gives me because much of my life is spent in confined areas like the bus and the dressing room.'

Kim gets her practical streak from her parents, Fifties rock star Marty and Joyce, who have been happily married for 30 years. One day she hopes to have that kind of long-term happiness with a husband and children 'but not yet'. It is clear she already has someone special to care for 'but I really don't want to comment on that', she said.

Right now she's on a career high and when she finally gets to meet Michael Jackson she knows exactly what she wants to say to him. 'I will thank him. I feel really close to him. I sit and watch him just like everyone else. He is just fantastic. I want to thank him for giving me such a great gift.' 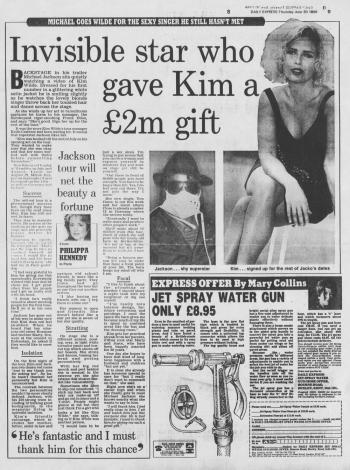