Once the world was Kim Wilde's oyster, exactly like she is pictured on the sleeve of her previous album 'Another Step'. That dominance was gained through successful singles like 'Kids in America', 'Chequered love' and 'Cambodia', written by father Marti and brother Ricki Wilde. She had everything: blonde hair, a pout and vocal talent. But the tide turned and despite attempts like 'You keep me hangin' on' and a duet with Junior Giscombe, entitled 'Another step', it was silent for a while around her. Five years on from her debut single she calls herself 'more mature and self assured' and talks about her past and present.

One aspect has changed from the old days: she writes and produces songs herself, next to the material composed by her father and brother. It is the classic example of wanting something, but thinking that it won't be successful. In Kim's example there waz a setback in that producer Mickie Most considered her to be a pop star, a blonde and reckless vamp, who was just singing. She laughs when she describes the public image of her. "There were more people who thought I only like the glamour side of things, maybe it was my behaviour at the time that caused this. I started writing songs at one point, in peace and quiet, one of them was 'Fit In', which is included on the album 'Teases & Dares'. I simply started with a four track recorder. In that period I also switched record companies. I can't blame anyone for looking at me in a certain way but I said to the label manager: 'Right, you've got Kim Wilde under contract, you've got a pop star, and I have no problems with that, but don't think that's what you get. Don't limit my potential!' It was a revolution for me. I had to write my own material, or else I wouldn't overcome the blonde sex symbol label.

For a classically trained pianist the change to keyboards and pop chords was a small one. "I was never interested in technology much. I only want to use what I need, such as a funky bassline and good drums".
"Oh, no big deal", she exclaims. "I can only programme the Fairlight 2, not the 3, but that's the one Ricki works on. I can only programme a song, that's what I needed to get ahead. I still forget the commands, and then I can start all over again."
It is still a family business: father and brother do the composing, mother arranges the management, and the younger brother and sister cheer them on. "We started working with Tony Swain as a producer recently. Despite all the changes and experiences we still have the 'Wilde' sound. It is not very trendy or bestselling, but we still make records and do what we want to do. How many people can do that? I feel very privileged in that respect. Of course I would want to do more. I would like to progress musically, but I know my limits. When you hear other artists it is obvious that everyone has something special. I am not a jealous person. I just think that some people are destined to have a special gift. Simon Climie for example has a great voice. What I want to do is to write good songs, to compose film music and to act. I have acted a bit in the latest video for 'Hey Mister Heartache'. I don't know if it was good, you must judge that for yourself. I did do better than I thought I would. I had to, or else people might think I'm one of those stupid pop stars who has to act all of a sudden."
The business woman starts talking now. "The video is made from my own money, so the result had to be good. My other videos? Well, it's okay. I am satisfied about my television and live performances, but I am not a perfectionist. I love unpredictable things. Sometimes perfection can be found in moods, than I feel totally happy... when you get inner peace and are satisfied with what you are doing."
The key to inner peace is the countryside for her, especially France. There was a time when she considered moving to France. "For someone who talks about this country so often I am not regularly there", she laughs. "But that language and the people... when I hear that language I simply melt. I know a lot of French people and through them I got in touch with the culture. I love their art, the south and Paris."
"The past few years I have looked around a lot over there. I am a star and a total stranger in France. For a big pop festival in Paris I learned a chanson, which Michel Berger wrote for Fran�oise Hardy, 'Premier Rencontre'. The version by Hardy is so typically French, so super feminine and cute. I listen a lot to French music and infect my friends with it. I don't know if it's very special for someone from England, I mean, we do learn French in school but the system is so bad that hardly anyone learns it properly, with the exception of myself. I was lucky in that I had a good teacher, who encouraged me. In school I had a few musical ambitions, besides the interest for animals. But when it comes to music, my father is the real freak. He has more cd's than I do! I grew up with interest in music, not just the music on the radio. I think an album is the best gift for a friend. I currently listen to the albums by Prefab Sprout, Aztec Camera, The Kane Gang. You could give me an album, but I probably own it already."

We can soon buy her new album for our collections, entitled 'Close'. She emphasises that it's very important that she wrote most of the songs herself. She mentions the song 'European soul' as the best result of her writing. "That song is about the painter Marc Chagall, of whom I'm a big fan. I have locked myself into the studio for a few months for the recording of this album. I also read a lot of books about artists, such as Chagall. I knew something of him, since I had art history in art college, but I never studied his work properly. I was more into Degas and Toulouse Lautrec then. When I saw Chagall's work I went to the Tate Gallery to see his paintings. I am touched by his use of colours and his compositions. The feeling of happiness is consistent with the song."
The one passion (painting) she combines with the other ("country"). She describes painting in the open air as inspirational.
"I paint whenever I have the time, like recently in Norfolk, when I made some aquarels on the beach. It is an escape for me, very relaxing. The mother of a friend of mine loved it, she felt I should expose some of my work in a gallery. The one where Prince Charles showed off some of his paintings recently. We thought I could do an ad in a local paper with a really tough picture of myself, 'hot and blonde' in combination with the beach views I made. Can you imagine that?"
She sits back, and exclaims "yummie, yummie!" when she sees the cookies with the tea. She paints a picture of her family in relative carelessness. "I was spoilt in a way that my business is being taken care of and I don't have to worry about that. Whenever I feel sad, I almost feel guilty: how dare I feel sad, when I have so much, a nice family, friends, career, health."
Add to that the 'good times' she likes and stacks of 12" records. "I buy a lot of club mixes and albums on cd and cassette. I can't imagine doing a lot of special remixes of my own songs, I live live performances, entertaining. I'm not great but it's reasonably good. I would like people to associate my music with the better part of life." 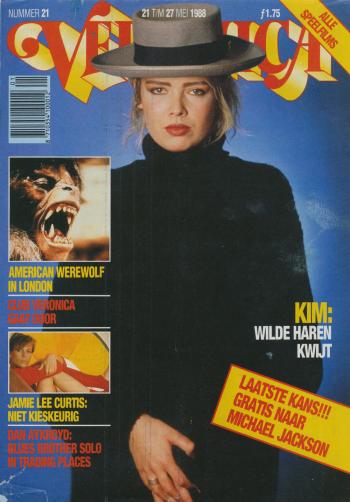 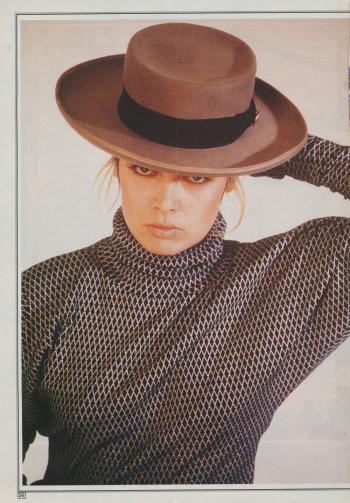 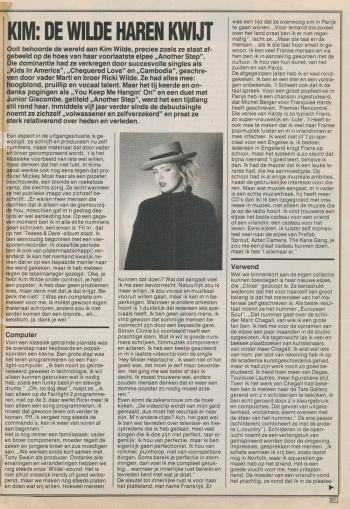